This morning, I heard the GB3WR repeater on 145.600 MHz. It was pretty weak and was 4/1 at best but the CW id was clearly audible. 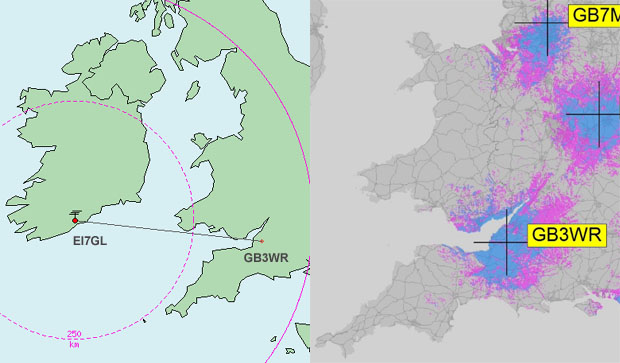 At just under 400kms, it is the furthest signal that I have heard this month. Considering I was using a home made vertical half-wave in the attic, I presume it would have been much stronger with say a beam outside.

Still though, it was interesting to hear a signal from that distance. The map above shows the locations and the key is of course the sea path.

Listening to the conversation this morning, the repeater antenna seems to be on a 200ft mast and the repeater site is at 1000ft above sea level on the Mendip Hills to the South-West of Bristol.

The repeater site is http://www.gb3wr.com/

Update 12:45pm: The repeater is still there in the noise. ID on CW is "GB3WR" and sometimes "GB3WR F". The repeater uses a CTCSS access tone of 94.8Hz which is tone 10 or 'F'. I presume the F in the ID is to tell people what the access tone is.