So far in 2019, the D4C contest team on Cape Verde Islands off the west coast of Africa have made some pretty amazing contacts on 144 MHz. Using the call D41CV, they have worked across the Atlantic to the Caribbean, up to the UK, France and Ireland via marine tropo ducting and into Germany, Italy and Slovenia with a combined Sporadic-E / marine ducting mode.

Many of these contacts were well in excess of 4000 kms in distance. See links to posts HERE.

The D4C team have recently announced that they are now active on 432 MHz (70cms).

As the tropo prediction map from F5LEN shows below, a marine duct off the west coast of Africa seems to exist for long periods of time during the Summer and Autumn months. 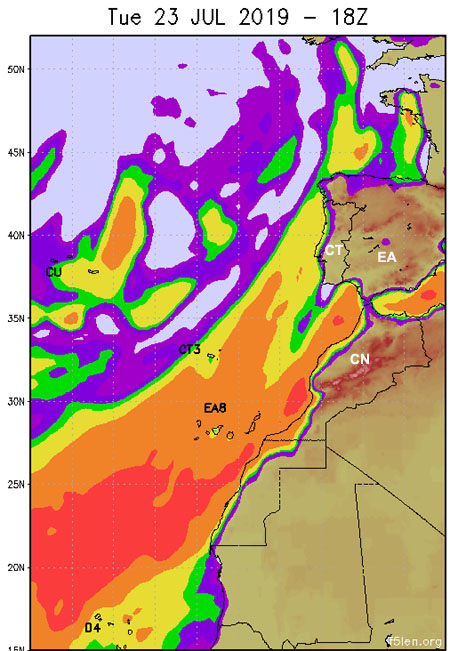 This should allow D41CV on the Cape Verde Islands to work up to coastal stations in Spain and Portugal on 432 MHz, a distance of roughly 2,900 kms.

Before we look at the potential of D41CV setting new records, we should probably look first at what the current IARU Region 1 record for tropo on 432 MHz is. 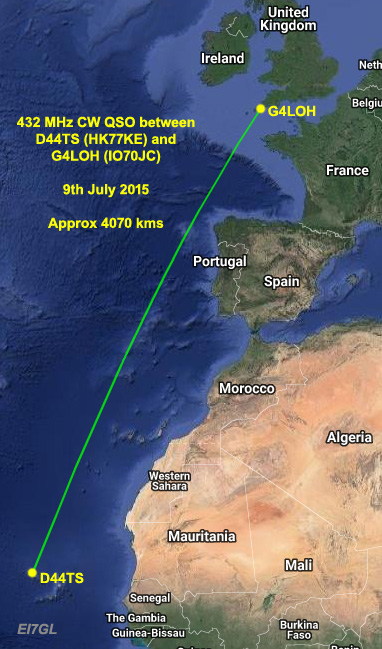 This contact was as a result of the marine duct extending much further north so that it managed to get as far as England.

Just to show how good conditions were that day, here is video clip showing G4LOH hearing the D4C/B beacon on 432 MHz...

One important point here is that G4LOH worked D44TS where as D41CV is actually on a different island. As you can seen from the map below, Cape Verde is spread out over several different islands... 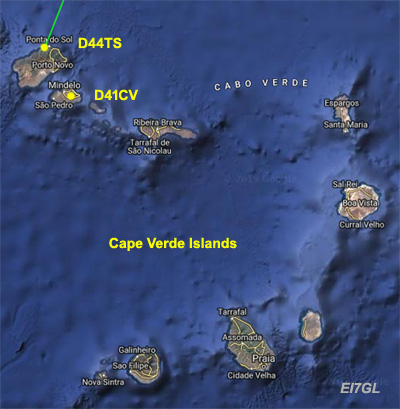 You'll also notice that D41CV is further south than D44TS. 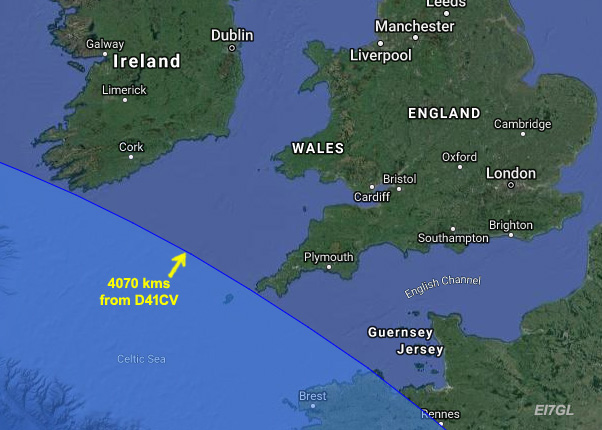 This means that if anyone in Ireland, Wales or England managed to work D41CV on 432 MHz then it would be a new IARU Region 1 tropo record.

I would suggest that as long as there is a 432 MHz capable station active on Cape Verde Islands then this is probably a case of 'when' rather than 'if '.

It's hard to imagine a 70cms signal getting across the Atlantic but it's something that can't be discounted.

Earlier in June of 2019, there was a tropo duct across the Atlantic from Cape Verde to the Caribbean which lasted several days and allowed the propagation of 144 MHz signals.

If 144 MHz signals lasted for several days, was there a shorter period of time when 432 MHz signals would have propagated inside the marine duct?

If it were possible then this is what the 4070 km distance from D41CV looks like... 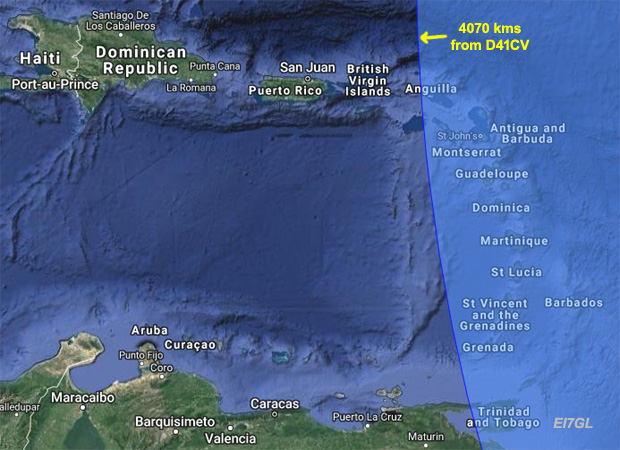 If a 432 MHz signal can travel 4070 kms from Cape Verde Islands to England then perhaps trans-Atlantic is not impossible?

There should be some interesting times in the months and years ahead as these possibilities are explored.

You are spot-on with the 'when, not if' assertion. Then again, 'if' only I had more time and more money to pursue every idea that comes into my head, then the 'when' might come a little sooner!

I'm sure that a crossing to PY-land is not beyond possible on 70cm from the UK. Next year will definitely see more VHF activity from me.