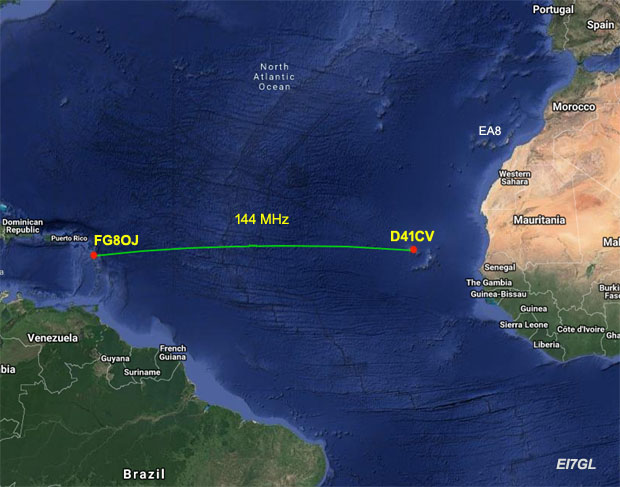 A historic contact was made on Sunday the 16th June 2019 when the Atlantic was spanned for the first time on 144 MHz.

D41CV on Cape Verde Islands off the coast of Africa managed to work FG8OJ in Guadeloupe on 144.174 MHz using the FT8 digital mode. The distance was an incredible 3,867 kms.

To put that into context, the distance from the west coast of Ireland to Newfoundland is 3,000 kms.

The map below shows the tropo prediction from F5LEN and it shows a path right across the Atlantic. 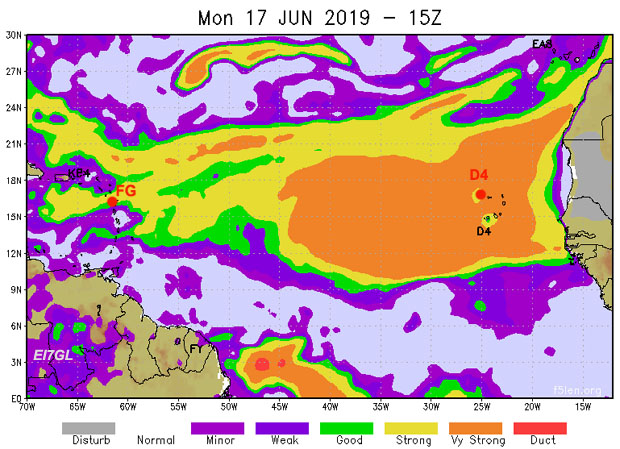 The mode of propagation was most likely marine ducting with the signal traveling in a layer near the ocean surface.

This is a screenshot from FG8OJ of the historic contact made on FT8... 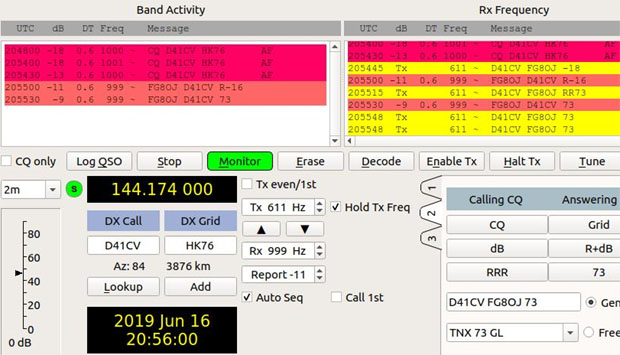 This is the FT8 signal from D41CV as heard by FG8OJ in Guadeloupe...

D41CV later worked FG4ST who was slightly further away at 3,911 kms. This contact was even more amazing as this station in Guadeloupe was running just 50 watts into a simple vertical on FT8.

Now that this historic contact has been made, more 144 MHz contacts across this part of the Atlantic are sure to follow.

Update : Sunday 23rd June 09:20 UTC... The 144 MHz trans-Atlantic opening seems to have come to an end although there is a hint it may open again for a day or two? The two metre opening lasted for the best part of five days, starting on Sunday the 16th of June 2019 and finally closing some time on the early hours of Friday the 22nd of June.

These are the trans-Atlantic spots on the DX cluster from the last few days... 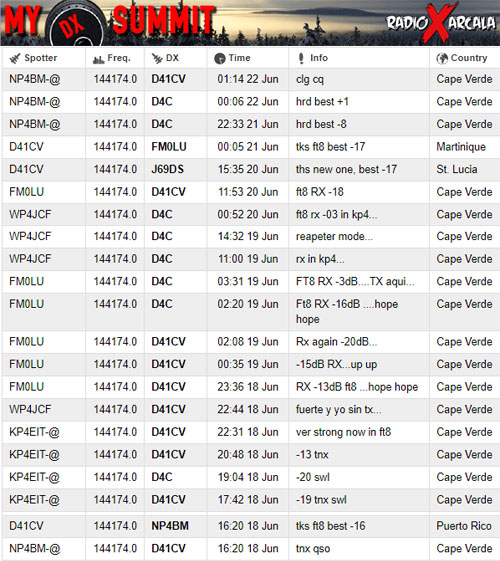 This is the log from the PSK Reporter website of the stations hearing and being heard by D41CV on FT8 on 144 MHz in the last 24 hours... one on the afternoon of the 21st and two in the early hours of the 22nd.

Update : Friday 21st June 08:30 UTC... It looks as if there has been a large cloud of dust from the Sahara blowing across the Atlantic for the last week. Is there a link?

This is the log from the PSK Reporter website of the stations hearing and being heard by D41CV on FT8 on 144 MHz in the last 12 hours... 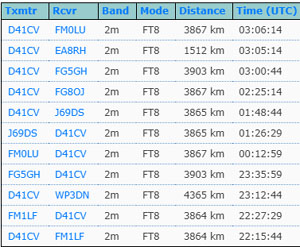 Update : Thurs 20th June 23:20 UTC... Incredibly the path on 144 MHz from Cape Verde Islands to the Caribbean is still open. D41CV completed an FT8 contact with J69DS in St. Lucia during the day.

This is a screenshot from the PSK Reporter website of the stations hearing and being heard by D41CV on FT8 on 144 MHz in the last 12 hours... 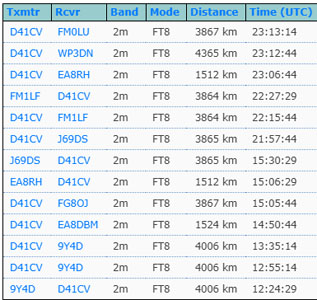 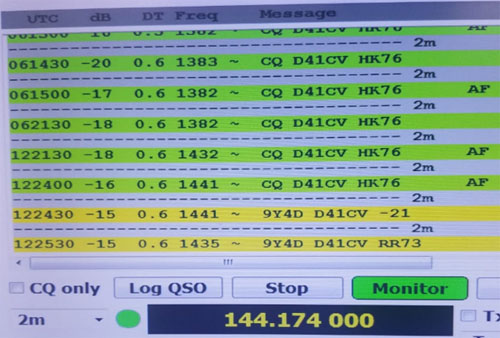 The screenshot below from the PSKReporter website shows part of  the send/receive map for D41CV on 144 MHz (12 hour window as of 10:00 UTC 20th June 2019). It clearly shows that the trans-Atlantic is still open after several days with 9Y4D in Trinidad being one of the latest contacts.

CW QSO.... The Cape Verde team now have a Yagi up and running and are using the call D4Z on CW. FG8OG managed to work them on CW for a trans-Atlantic first on that mode on 144 MHz... 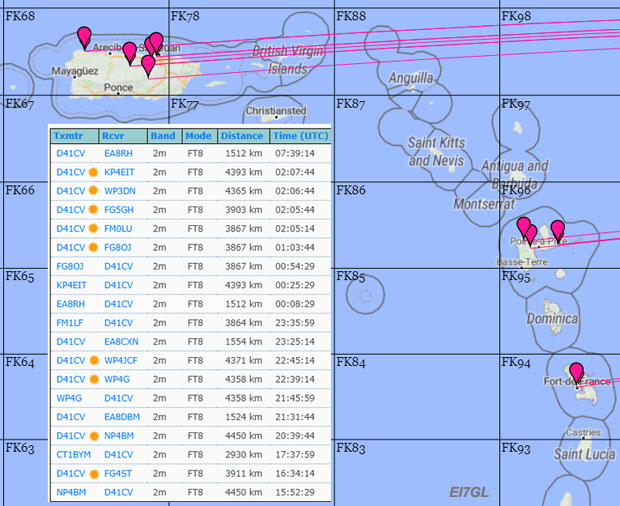 The orange dots on the list indicate those that have heard D41CV. It looks as if this trans-Atlantic path has been there for the best part of 48 hours.

Brendan Trophies... Now that the Atlantic has been crossed on two metres, a question was asked if it qualifies for the Brendan Trophies from the IRTS.

As can be seen from the rules, they are for contacts from Europe.

"The Brendan Trophies and Brendan Shields will be presented to each of the operators of the two amateur radio stations which first establish two-way communication in the relevant category between the continents of Europe and America (North or South) within the Two Metre Amateur Band. "

Well, that's great news! A lot of earlier attempts have been restricted to DXpedition-style operations over a very limited time period, which explains much of why it hasn't been achieved before. A number of those have been in late, rather than early summer, when conditions are far less likely to yield the propagation sought.

Very interested to see the view that marine ducting was likely responsible. This kind of very low angle propagation was being dismissed as an unlikely mechanism by one of the people earnestly involved in trying to make the 144MHz Atlantic crossing as recently as a year ago. 'Too much atmospheric extinction', claimed the OM. Too much like putting all your faith in vast ladder antennas and high power, I thought...

Another Official source of Information is https://m.facebook.com/D4C.D41CV.VHFandUP/?ref=bookmarks

I believe the mayor distance at the moment is NP4BM! Isabela , PR

I believe that NP4BM is the longer new record!

Notes about Brendan Award: The Brendan Trophies wiiil be awarded for the first traditional mode 2 way contact. Modes permitted are phone and cw capable of being read without machine assistance.

So A transatlantic 2 m contact between Europe and America using FT8 would not be valid since it needs to be decoded by a computer.

However, an FT8 contact between Europe and America would be valid for the Brendan Shields or Brendan Plates.

Congratulations! Many years ago I shared the European/Africa 2 metre DX record with EA8LM from GI to EA8 on SSB. I was and still am confident that Europe/North America will be achieved on 2 metres. 73, Brian, GI4KIS. :-)

The best in-sight about our achievements.
Many thanks EI7GL

Ref: HB9DUR - Thanks Andrea. I think it's important to record as much information as possible so that it can be easily found in the future.

HB9DDS... Going on that logic then a contact between Ireland and Newfoundland wouldn't count either even though nearly everyone would consider it trans-Atlantic.