WSPR is a great digital mode for digging signals out of the noise but the problem on 28 MHz is that the number of users on the band is low. FT8 has that critical mass where as WSPR doesn't.

I had thought about setting up a separate receiver and decoder for WSPR on 28 MHz but it didn't seem to be worth the effort.

One of the best things about this blog here and the blogs that I follow is the interaction between readers. People leave comments and put up posts that can spark your interest in something new or unusual.

One of the blogs that I follow is that of Jim, GM4FVM in Scotland. He mentioned in a recent post that he was using WSPR on 28 MHz. That got me thinking about WSPR again! :o)

I dug out the old manual for my radio and rediscovered how to set up the memory channels. I now have the 28 MHz FT8 frequency with all the suitable filters in memory slot '00' and the 28 MHz WSPR frequency in memory slot '01'. There is no more tuning around, I can hop between the two modes by just turning a knob.

The WSJT-X programme allows for easy switching between the two modes as well as shown below... 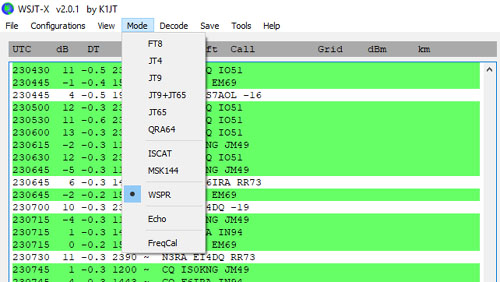 The upshot of all this is that I can now change from FT8 to WSPR or vice versa in less than 10 seconds.

My primary use of FT8 is to gauge what propagation conditions are like on 28 MHz and to feed those spots up to the PSK Reporter website. To do this, I don't have to have the radio parked on the FT8 frequency all of the time, just most of the time.

I already take short breaks from monitoring the 28 MHz FT8 frequency to work individual stations I see spotted on the cluster on 10m and other bands. What I am going to do now as well is to monitor the 28 MHz WSPR frequency for 10-20 minute periods when the band is open.

It's obviously not as good as listening to WSPR all of the time but at least it allows me to feed some reception reports to the WSPRnet site to let others know that they have been heard.

My first test of this was on Thursday the 13th of June 2019 when I listened for short periods...

2) Note the signal from Vernon VE1VDM in Canada. He was using just 375 milliwatts to a dipole!

Because of my westerly location in Europe, I was the only person to hear his signal on this side of the Atlantic. The distance was about 4,000 kms which is equivalent to two 2,000 km Sporadic-E hops. This isn't far from the maximum distance of about 4,500 kms for two hops.

These are the WSPR stations that I heard in chart form...

Time to consider 28 MHz WSPR??? .....Considering how easy it is, I would suggest that any readers of the blog considering monitoring the 28 MHz WSPR frequency as well. The more people that provide reception reports, the more useful the resource becomes.
Posted by John, EI7GL at Saturday, June 15, 2019