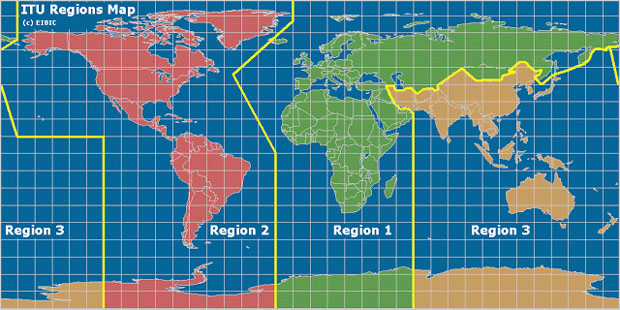 The World Radio communication Conference WRC-19 has just approved an allocation in the 50 MHz band for radio amateurs in Region 1 which includes Europe, Africa and the Middle East.

The entire region will now have an amateur secondary allocation of 50-52 MHz. This is usually granted on basis that secondary users do not cause interference to primary users of the band.

The exception is the Russian Federation, whose administration opted for only 50.080-50.280 MHz on a secondary basis.

This change should make a big difference in areas like Africa where only 11 countries have a primary allocation at present. The secondary allocation now opens the door for more activity from the continent.

According to a press release from the IARU, they state..."The exact manner in which the allocations will be implemented in Region 1 countries will be determined by each administration and may be either more generous or less, depending on national considerations."

So what does this mean??

While 26 countries in Region 1 currently have primary access to 50-54 MHz, the fact is that the vast majority of all 6-metre activity happens between 50 and 52 MHz. By having an official secondary allocation, radio amateurs in countries in Africa, Russia or the Middle East will now have a more valid reason for access to the band. This should result in more activity from those regions and this will be of interest to radio amateurs in western Europe.

It means that there is likely to be more DX related activity on the band which should encourage more activity. Every Summer, there will be multi-hop Sporadic-E from Europe to some of those potentially new countries on the band.

While the current predictions for the next sunspot cycle in a few years time aren't great, it should still result in good north-south paths. For stations in western Europe, this should result in openings to new countries in the Middle East and Africa.