While most of the activity and interest in the new 8-metre amateur radio band is in Europe, it's worth remembering that since 2015, there has been a small 10 kHz allocation in South Africa which goes from 40.675 to 40.685 MHz.

Willem, ZS6WAB in South Africa operates a number of beacons on several VHF bands including one on 40.675 MHz. An old ICOM IC-706 is used for the CW beacon and the antenna is a 5-element YU7EF designed Yagi.

The map below shows the location of ZS6WAB in the NE corner of South Africa in the locator square KG46RB. 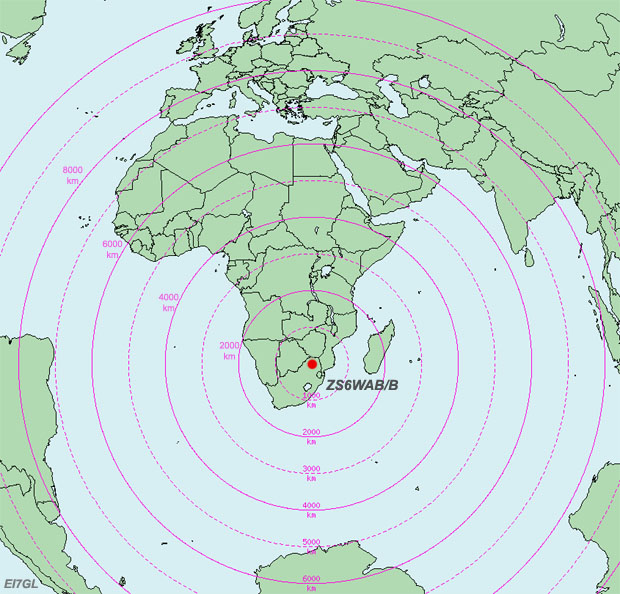 Considering that the ZS6WAB beacon in located in the NE of South Africa, it should easily be heard in the SW of the country via Sporadic-E propagation.

Outside of South Africa, it's a long way to any other potential activity area. The best path is probably via Trans-Equatorial Propagation (TEP) to Europe. Even though it's in the region of 8000 kms, the beacon will almost certainly be heard in Europe and it's just a case of getting people to listen and report it.

There is also potential multi-hop Sporadic-E paths to Western Australia and South America but again, it's a case of someone being interested enough to listen.

At the peak of the upcoming sunspot cycle, the 40 MHz beacon may well be heard quite easily on multiple continents including North America.

Even though this beacon has been operational for some time, there have been no reports of it on the DX Cluster outside of South Africa as of February 2021. Hopefully this post might encourage a few more people to have a listen.