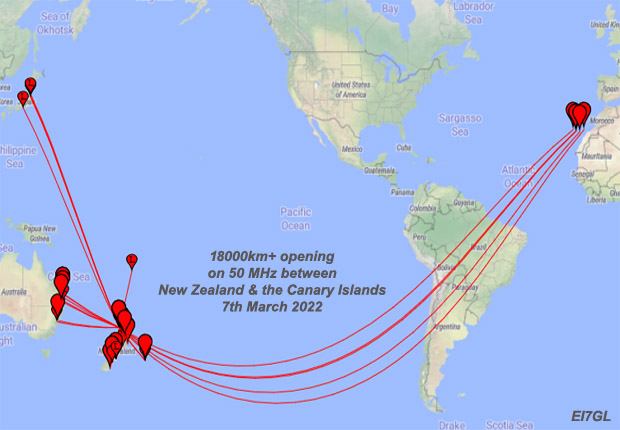 Monday 7th March 2022: There was an extremely long distance opening on the 50 MHz band between the north island of New Zealand (ZL1) and the Canary Islands (EA8) and in most cases, the distances were well in excess of 18,000kms.
If you consider that the circumference of the Earth is 40,000kms then this opening was close to the border line of what is short path or long path. See EA7 below.
Looking at the reports on the PSK Reporter website, the opening from ZL1 to EA8 occurred around 22:30 UTC. What's interesting is the EA8 stations had what looks like a TEP opening to South America about an hour later but it didn't seem to coincide with the ZL1 opening.
Questions... Like many openings, this one raises more questions than it answers.
1) Was part of the path due to TEP (Trans-Equatorial Propagation)? If it coincided with the opening to South America then yes but it seems to have been before it.
2) The map above for ZL1RS in New Zealand shows the shortest paths to the stations in the log on the PSK Reporter website. Was the path to EA8 direct or slightly skewed? Was the real path not actually over South America?
3) I checked the reports for the ZL1 stations and none of them show a South American station and yet, the opening was supposed to have gone over the continent of South America. There seems to have been an opening later from the south of New Zealand (ZL3) to Central America and Mexico. Was the real EA8-ZL1 path skewed and further north?
4) Propagation mode?... I would think that a large part of the path was due to chordal mode without the signal hitting the ground. 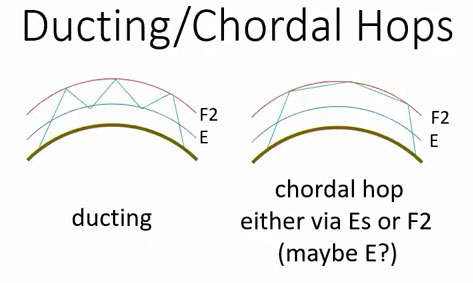 These are the spots from the DX Cluster for the evening / morning. As you can see, all of the activity seems to have been via digital modes like FT8 on 50.313 MHz...

Really interesting reporting and analysis here John. I am fascinated to continue to follow this over the coming weeks and months - it feels like the tools like FT8 that we have at our disposal now vs. at the same time in the last solar cycle, along with the research and analysis that you and others are doing, are enabling you to really be right at the forefront of some big discoveries propagation research. Exciting times. Cheers Graeme M0EUK

John,
another possibility is antipodal focusing propagation. The late Gary Bold ZL1AN (SK) wrote his doctoral thesis on "Antipodal HF propagation" (http://hdl.handle.net/2292/2595) which may be worth a look.
jon, ea2sn / ae2sn

All my QSOs were done with my yagi beaming SA. Once done, I pointed NA and EU but best SNR always got via SA. No doubt.
73 de EA8AXT

Yesterday night 17h30 UT, I made an amazing QSO with Costa Rica TI5MVJ on 28.535 Mhz RST: 59 +10 db. Very unusual according to my current working conditions. There was an ES opening at the same time, I could hear some spanish stations around. This Costa rican station appeared with absolutly no usual long distance voice distortion what makes me think it probably was a phone chordal hop QSO too.

The EA7 and CN8 reception at ZL1RS did not appear on PSKr because I had the 'reporting' switched off at the time. Here are decodes from my JTDX 202203_all.txt file: