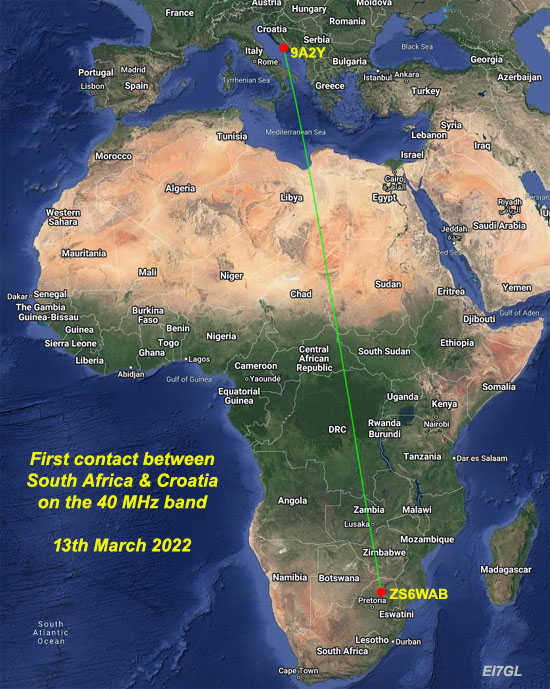 Back in October of 2021, I reported on the first ever contact between South Africa and Slovenia on the 40 MHz band. See post HERE.

On the 13th of March 2022, there was another 'first' 40 MHz contact when when Milan, 9A2Y in Croatia managed to complete a successful FT8 contact with Willem, ZS6WAB in South Africa.

The distance was in the region of 7,585kms and it took place at around 12:36 UTC. This would have been an hour or so after local noon and the F2 layer was likely at it's highest ionization.

Considering it was a North-South path, I suspect that F2 and TEP propagation was involved without any need for a Sporadic-E extension at either end.

The solar flux on the 13th of March was at 123 which is a lot higher than last October when it was just 78 when the first ZS-S5 contact took place. 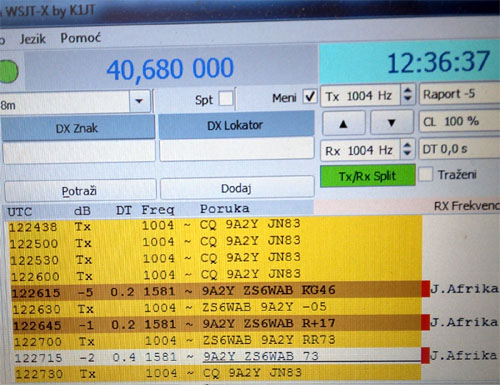 The screenshot above from 9A2Y shows the FT8 contact. As can be seen, the signal from ZS6WAB was  -5dB in Croatia which suggests that a contact on CW would have been possible but unlikely on SSB.

Equipment: I'm not sure what 9A2Y was using but ZS6WAB uses an old ICOM IC-706 for the 8m CW beacon with a 5-element YU7EF designed Yagi so I presume that is what was used.

Quite a number of European stations have reported hearing the ZS6WAB beacon on 40.475 MHz over the last week or two. Considering it's located halfway between the 28 MHz and 50 MHz bands, it is now hopefully giving early warning of potential 6m openings between South Africa and Europe.

As always, if you want more information on the new 8m band then check out the links on my 40 MHz page.