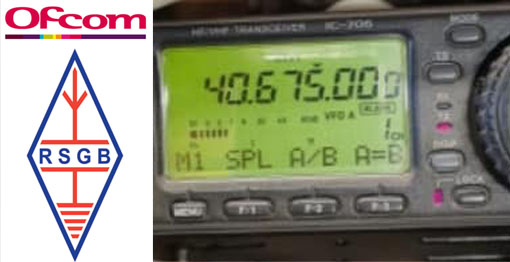 In a previous post, I outlined how several radio amateurs in the UK were in the process of applying for Innovation and Trial licences from OFCOM to carry out tests on the 40 MHz band.

The RSGB have now outlined the position of OFCOM on the issue...

There have been recently a number of reports of individual holders of UK Amateur licenses gaining Innovation and Trial licences from Ofcom to conduct experimental transmissions on 40MHz (8m).

Ofcom has made it very clear for several years that there was no likelihood of UK radio amateurs gaining any access to 40MHz which included NoV (Notice of Variation) to a UK amateur licence or an amateur SRP (Special Research Permit).

The RSGB has consulted Ofcom as to the exact status of these Innovation and Trial licences. Ofcom’s reply was as follows:

“We have been approached by a couple of individuals wanting to conduct experiments in the band. Like all other research and innovation requests Ofcom receives we have put these through our Innovation and Trial licensing regime. If the coordination checks are passed, they are being issued with an Innovation and Trial licence. These are issued for up to 12 months on a non-interference, no protection and non-operational basis.

These are not Amateur Radio Special Research Permits and licensees do not fall under the Amateur Radio licence terms and conditions. Therefore, applicants are not required to have passed an amateur exam or hold a callsign. Although we are allowing this experimentation, we would like to make it clear that we have no proposals to allow wider amateur radio access to the 40 MHz band.

We would like to make clear that we have not duly authorised any amateur to use a frequency band not specified in Schedule 1 through this process. Reception of transmissions authorised under an I&T Licence should therefore be treated the same as those authorised under other licences that Ofcom issues such as business radio or maritime.

We would also like to make clear that I&T licences do not permit operational or commercial use. These licences are designed to support individuals and companies in carrying out research, development, testing and demonstrations of equipment.

Therefore, the use of the 40 MHz band under this licence should be for these purposes only. The licences are granted on the basis that the user will be carrying out such research and not operating on the band in a similar way to the frequencies listed in Schedule 1 of the licence.”

Ofcom’s view is very clear. Any operation on 40MHz in the UK is not Amateur radio and therefore cross-band contacts to such stations by UK radio Amateurs operating on the bands licenced for amateur radio are not permitted.

Just to highlight that the RSGB are just outlining the position of OFCOM so there is no point in bashing the RSGB over this.

Sensible, and clarifies it nicely. Sent my innovation and experiment request in today to OfCom and hope to hear back positively at some point.

Intended activity "to understand the performance of a travelling wave resistor terminated antenna and it's behaviour on the spot frequency of 40.663 Mhz" etc etc.

I hope to use WSPR and FT8 to experiment with similar other stations, and to receive WSPR reports from listening stations in the amateur community.
//G1WZM

John,
…..The Licensee may receive Messages from an overseas amateur or from a UK Amateur duly authorised by Ofcom on a frequency band not specified in Schedule 1….

Question:- Surely you are not ‘duly authorised’ to act as a UK amateur on the 40Mhz band?

I cannot even see the legality in you transmitting WSPR and it being reported via the internet on WSPRnet and similarly for FT8 signals to be reported on PSKReporter, as the receiving UK stations would be breaking the above licence terms.

Waddayathink? BTW- I’m all prepped up ready to listen out for '3xbm on 2nd April.

To G4APB: I don't see any issue in someone sending reception reports via PSK Reporter, WSPRnet or by email. The licencees can make transmissions as part of their 'Innovation & Research' and people can report on these transmission.

Radio amateurs in the UK however cannot work the Innovation & Trial licencees by cross band.

I would also think that the Innovation & Trial licencees are not able to work each other on 40 MHz. I don't think they are allowed to make contact with radio amateurs in other countries where 40 MHz is allowed.

Seems to me there's a lot open to interpretation that only legal experts could answer.

Does a UK radio amateur licence state what bands and frequencies they are allowed to monitor, receive only? If it doesn't the only way a licenced UK amateur could fall foul of the law is through the WT act that permits anyone to listen to only broadcast, radio amateur and frequencies for which they're licenced. Much of the ISM band is licence free so whether that allows all and sundry to listen to it without falling fould of the WT act I don't know. If that is the case and there's no law broken by monitoring the ISM band then how much communication becomes 'working'?

A remote station evaluating and reporting received signals is very much part of the research angle allowed under the T+I licence, if that is fed back via the internet or amateur radio then no laws are broken AFAICS.

I+T licence holders surely can work each other as part of the research and trial aspects of the permit, in that specific instance amateur radio doesn't even enter in the conversation?

The usual mud-clear output of OFCOM, who appear not to understand that there are rules, and then there are rules that can't realistically be enforced. They don't even seem to enforce the laws that are clear and ought to be enforceable (RFI from BT, etc).

So, if one need not hold a licence to experiment on 40MHz, what's going to identify them to the outside world? They could just punch-in a non-incriminating identifier of their choosing - 'banana', let's say - and then merrily transmit and/or receive at will. The usual trick of not doing so for long periods, from the same place, will avoid identification, not that OFCOM is doing any, anyway.

It's illegal to listen to airband transmissions unless you hold a CAA WT licence (which I do). But who is pursued for that? It's just a joke.

OFCOM is irrelevant, mostly through its own actions. We continue to hope it will be swept away and replaced with something that does the work properly.

Ladies and gentlemen, can we standardise on the correct term for these Ofcom "Innovation and Trial" permits please? In the above few posts and elsewhere on social media I have seen them referred to by several terms and it is just adding to the confusion of an already misunderstood topic. I myself have been using "Innovation & Research" as that was how I first heard of them and that plus "Innovation & Trial", I + T, T + I and various combinations and permutations thereof along with some misinterpreted or misleading terminology also being used.

《It does not permit any sort of commercial or operational use. There are two licence classes:

Even from this I am unsure if they are permits or licences and I have a number of other issues that need clarification.

My own view is that the RSGB and OFCOM are both STUPID!!! Why not grant 5 kHz only, narrow digital only, by NoV, strictly non interference to the amateur service to encourage propagation research and self training of UK radio amateurs?

As it is, I can operate on 8m without a callsign (traceability? - forget it).

No, the RSGB should have made it clear to OFCOM that this is about research and self training and NOT discussing arthritic knees with commercial gear on 80m!