In a previous post in February of 2022, I reported on how the UK licensing authority OFCOM had refused to give NOV's (Notice of Variation) to radio amateurs to carry out tests on the 40 MHz band.

The good news is the OFCOM are allocating temporary Innovation and Research licenses. 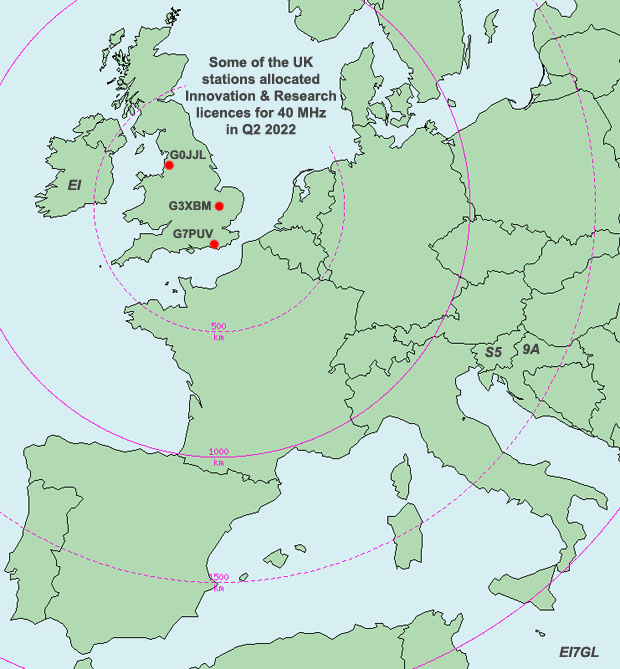 Roger, G3XBM in the east of England can operate from the 2nd of April for 1-year with 5-watts. Roger writes... "After a very long wait OFCOM has approved my 8m TX permit that runs from April 2nd for a year.

It permits me to use 40-42MHz with digital modes (including CW) at 5W ERP max. I expect to erect a wire dipole which is directed towards Europe.

I expect to be mostly on FT8 around 40.676MHz with precise frequency done in liaison with others. What I hope is all 8m FT8 stations can be monitored with one USB dial setting, but spaced out. 5W should certainly cover Europe with Es. I shall try some local CW crossband QSOs, but hope to be on FT8 24/7."

John, G0JJL in the north-west of England can operate from the 1st of May 2022. John writes... "I am one of the UK Amateurs that have recently obtained a temporary 12 month licence to transmit on 40MHz.

These licences are not Amateur Radio special permits, they are Innovation and Research licences which have nothing to do with Amateur Radio at all. In fact, anyone in the UK can apply for this type of licence whether they are a licensed Amateur or not.

My Innovation and Research licence was granted to allow research of propagation in the 8m band and my licence permits use of 40.680MHz and 40.690MHz using narrow band digital modes and CW from 1st May 2022 from two locations. The callsign to be used is GR9A."

Neil, G0JHC in the north-west of England has also applied for a permit and will be using the callsign GR9B. Neil is located in the same area as G0JJL.

Paul, G7PUV in the south-east of England is currently applying for a permit. Others are likely to follow.

Analysis... This is indeed welcome news as it allows more signals on the band which is great for experimentation. There's only so many times you can report a beacon on 40 MHz.

At the end of April, the Sporadic-E season will have started and it should be quite easy for the UK stations to be heard in countries with permits like Slovenia (S5) and Croatia (9A) which are around the 1200km mark.

By late May and all of June, there should be plenty of short skip Sporadic-E with distances in the region of 500-1000kms possible.

There are plenty of opportunities for radio amateurs in the UK to participate in these experiments by listening for the permit holders and working them cross band from 40 MHz to either 28 MHz or 50 MHz.

40 MHz is an excellent band for meteor scatter tests. Tropo contacts up to 200kms may be possible and aircraft scatter propagation can also be explored.

Trans-Atlantic contacts to the permit holders in the USA should be possible in May and June by multi-hop Sporadic-E. There is also the possibility of very long paths to South Africa.

Maybe in time, radio amateurs in the UK will get an allocation at 40 MHz but for now, this is a 'foot in the door'. The results of these Innovation & Research permits can be used to show a real need for a formal amateur radio allocation for this band.

Can EI stations work these special permits? ...Not to be pedantic but the answer is no. In Ireland (EI), the amateur radio license states quite clearly that we can only make contact with other radio amateurs. Making contact with a special experimental license in the USA, Canada or the UK is not the same as say Slovenia, Croatia or South Africa.

It's up to EI stations what they do formally or otherwise but I'm just clarifying the current situation.

ComReg states that we are only allowed to make contacts with other amateur radio stations.
An amateur in the US or UK or anywhere else is still an amateur. S/he does not lose the status as amateur when transmitting on 40 MHz.
Since Irish stations are allowed to transmit on 40 MHz and since those stations with a special permit are also amateurs I see absolutely no reason why we should not be allowed to work those stations. It would not be against the present rules governing amateur radio in Ireland!

Because the Innovation and Research licences are held and used by Amateur Radio operators, I see no issue in contacting these stations.

I guess the only issue could be that UK licence holders don't need to be radio amateurs or use amateur radio callsigns so it would be down to the 'other end' to confirm it was a legit before making contact. In reality of course UK stations are going to be hams but how picky is Comreg and other national PTT admins?

Interesting that they WERE able to issue me with an NoV for VLF work at 8.7-9.1kHz several years ago, despite the not being an amateur band! Instead for 8m, we have to pay!!

Keith G4FUF
Its fundamentally clear that OFCOM just see's I+T licenses as a form of revenue, in this instance selling something they don't own.
Clarification of "non-operational" would suggest that NO 2-way "contacts" of any form are actually permissible to other "stations"
licensed for the band or otherwise. Sure you can radiate a signal for test purposes and that's about it.
This is all about transmitting, no reference about receiving.
Because an uncoordinated approach has taken place Its apparent that every I+T application and "permit" issued, so far, has pretty much
given the applicant what he asked for....and they are all different.
As regards using "any callsign" or identifier beggars belief, the whole purpose should be a unique identifier, how else do they track
the individual permit holder if there was a "safety of life" scenario....
Yes, "QSO's" will take place but will never be recognised as such. I see this as a £50 contribution to the UK Government coffers.

As a UK 8m permit holder using my amateur radio callsign G3XBM I shall be happy to receive any reports of my FT8 tests on 40.68 USB dial. If this is an exchange with reports and locators I think this will be legitimate under the terms of my experiment if not officially a QSO.