Over the last few weeks, there have been several remarkable openings on 144 MHz from Cape Verde Islands off the west coast of Africa.

On the 16th of June 2019, there was the incredible opening from Cape Verde Islands to the Caribbean which lasted on and off for roughly five days. See previous post.... https://ei7gl.blogspot.com/2019/06/historic-trans-atlantic-contact-made-on.html

On the 2nd of July 2019, there was a combined Sporadic-E and tropo event which allowed signals from Cape Verde Islands to be heard in Germany. See previous post... https://ei7gl.blogspot.com/2019/07/144-mhz-path-opens-up-between-cape.html

There was however another remarkable opening on the 9th of June 2019 which wasn't well reported at the time. See map below... 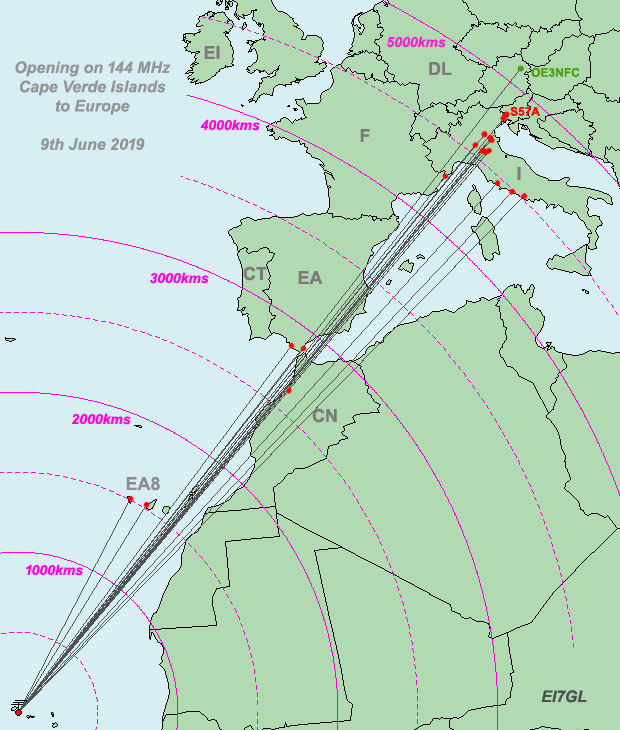 Thanks to a log extract provided by the D4C team, I have been able to put together a reasonable record of what took place.

The map above shows the stations that D41CV worked on 144 MHz with the digital FT8 mode. The chart below shows their log and what was worked. The 'normal' tropo contacts are in Black. The combined Tropo Sporadic-E contacts are in Red. The reception report from OE3NFC in Austria is in Green. 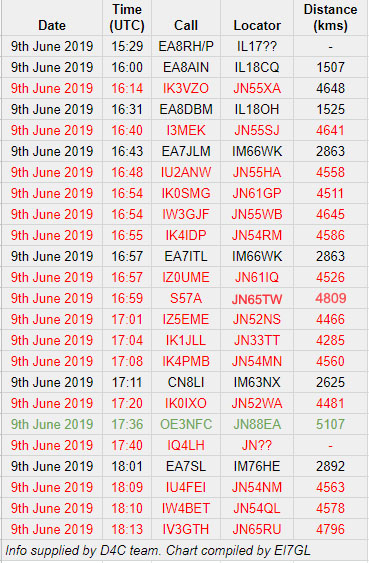 Evidence - Tropo... First off, lets have a look at some of the information available from that time. This is a map of the tropo predictions on the day which indicates the likely marine ducting path from Cape Verde Islands up along the west coast of Africa to Morocco and the the south of Spain. 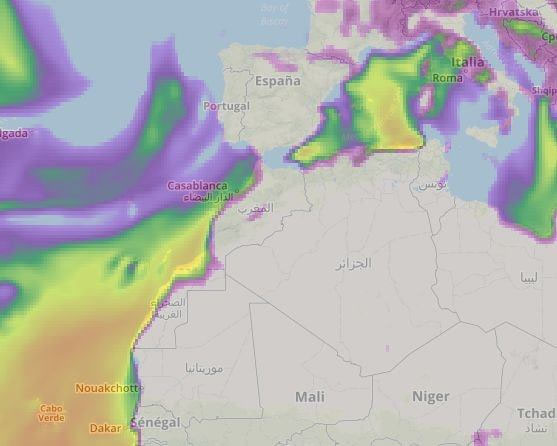 As can be seem from the log, D41CV managed to work two EA7 stations and CN8LI which suggests  this sea path was open..

Even though the south-west coast of Spain is some 2,800 kms distant, this marine ducting path seems to be a regular feature in this part of the world and is no great suprise at this stage.

Evidence - Sporadic-E... These are the spots from the DX Cluster showing Italian stations hearing CN8LI in Morocco by Sporadic-E at the time. 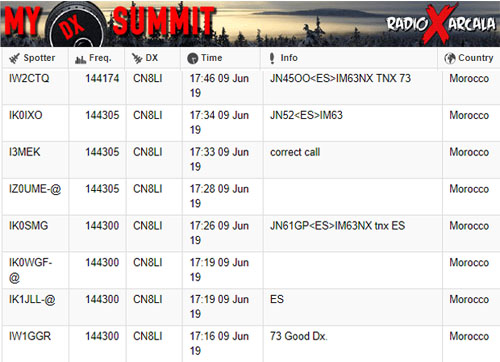 Considering the distances involved and the evidence above then it would seem likely that the Italian stations managed to catch a Sporadic-E opening on 144 MHz to an area near Morocco where the signals then entered the marine duct which extended down to Cape Verde Islands.

Some points....
1) 16... There were 16 FT8 contacts made which were via a combined marine tropo ducting - sporadic-E propagation mode.

2) N Italy... Notice how the contacts in the north of Italy are laid out in a line... typical of a Sporadic-E footprint which tends to be be long and narrow. They are also crucially far enough north so that the Sporadic-E signal from Italy lands near the water off the west of Morocco.

3) C Italy... The three Italian stations in central Italy are interesting. Notice how they are all on the coast. Perhaps they were availing of some tropo enhancement from the Mediterranean to allow the Sporadic-E signals to land near the ocean off the very southern part of Morocco.

6) Austria... Remarkably, D41CV was also heard by Norbert OE3NFC. Norbert was using 4 x 7el LFA at 12 metres above ground level to a Low Noise Amp & G4DDK transverter into a Flex radio. He was hearing the FT8 signals from D41CV at -17dB.

On that last point, OE3NFC in Austria was roughly 5,107 kms from Cape Verde Islands.

It's very easy to look at the figures and not actually realise just how far that distance is. To put it into context, this is what 5,000 kms looks like.

Imagine putting a 144 MHz transmitter on the west coast of Ireland and it reached this far into North America.... 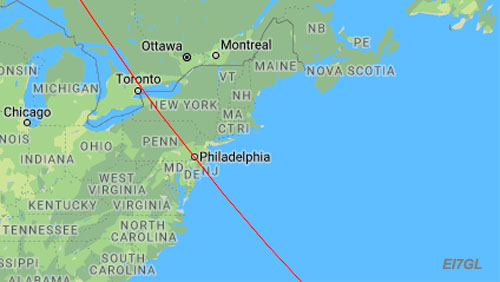 We can repeat the exercise by imagining there was a 144 MHz transmitter in St.John's Newfoundland and it reached this far into Europe.... 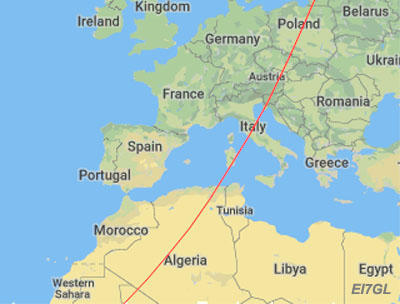 In conclusion..... Overall, a remarkable set of contacts by the D41CV station. Considering how often there is a marine tropo path off the west coast of Africa, there should be more openings like this in the future.

Acknowledgement : Thanks to the D4C team for providing a log extract which was the basis of this post.

Fabulous results on 144 MHz with the FT8 mode, particularly as this year the Es level overall on 144 MHz is looking to be below average compared with annual data going back each year to 2001. The weak signal FT8 mode is allowing for contacts to be complated which probably wouldn't be made using CW or SSB.

Thank you for your this. Quite remarkable.

Thanks for the report. I was also listening on that very time direction D4. I am just some 47km away from him. I run 4x14 ele with good LNA's and was in contact with Norbert via Whatsaap. I have not seen any trace atthe time that Norbert did his caption. Mind you, I was very jealous, hi. 73 de OE3FVU.

FB article John, only a comment : as far as I know S57A is in JN65TW and not JN76TN but I could be wrong

Ref : IV3GTH... Yes Gigi, I think you're right. I have updated the post now with the correct locator square for S57A. Still the best DX at 4809 kms.

John,
on behalf of the Monteverde Contest Team D4C-D4Z-D41CV I say thank you for this fantastic opportunity your are giving to us and to the ham community to keep a clear track on these achievement.
Chapeau!