In a previous post, I reported on the first ever trans-Atlantic contact between the Canary Islands and the Caribbean on 144 MHz. As with many other posts, this generated some discussion online and I was interested to read that the first 144 MHz trans-Atlantic report to the Caribbean was back in 2015 by PJ4VHF. 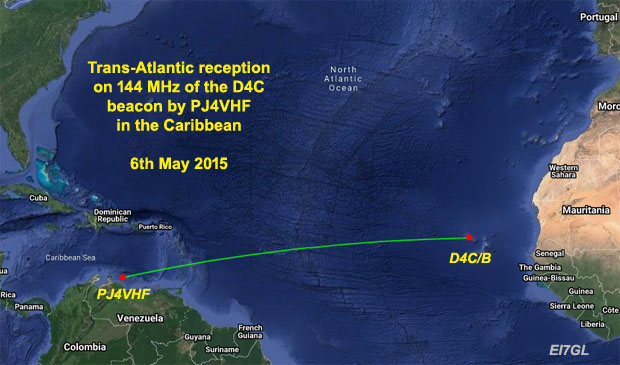 To be honest, I can't remember seeing this before and it's possible that I did read it but forgot about it. As I keep a record of the 2m trans-Atlantic openings on my 144 MHz page, I thought it only right that I should do up a post about it and have a record of it here on the site. 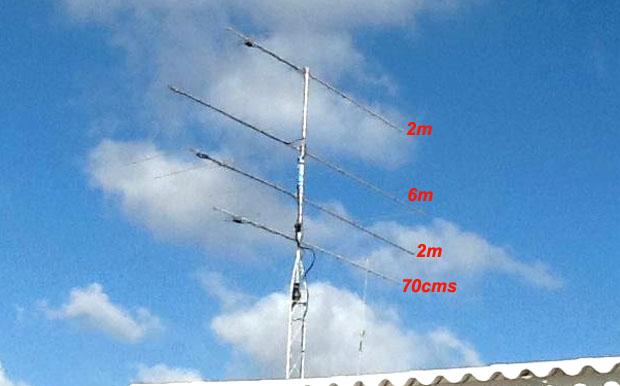 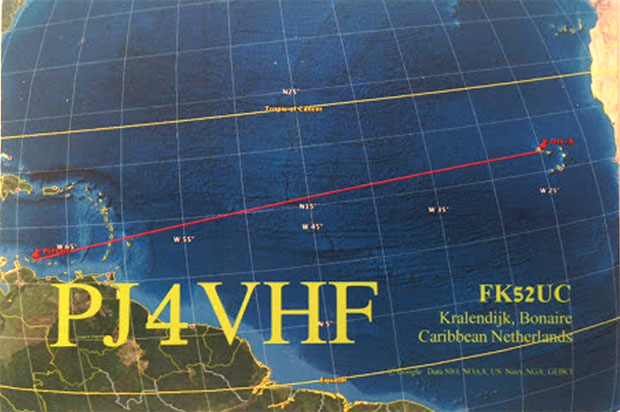 The D4C beacon was running 20 watts into a 5-element Yagi and the CW signal was reported as being 10dB out of the noise.
The video above shows the reception of the D4C beacon on the 6th of May 2015. The morse code message reads... D4C/B HK76MV     DE D4C/B HK76MV
The reception report was subsequently confirmed by QSL card... 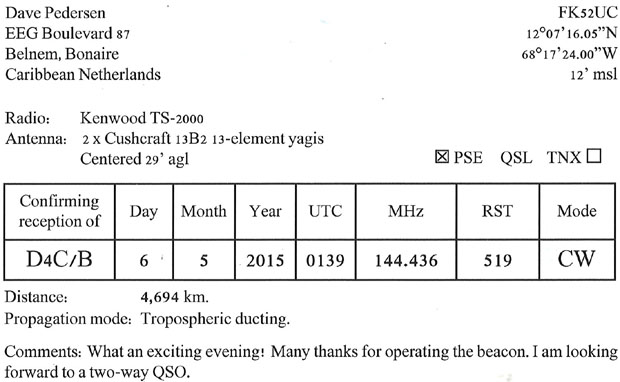 From the ARRL News..... Pedersen, PJ4VHF/N7BHC, on Bonaire copied a 2 meter CW signal from the D4C/B beacon on 144.436 MHz at Cape Verde via tropospheric ducting on May 6 (0100-0230 UTC). Bonaire is in the Caribbean just north of Venezuela, while Cape Verde is off the coast of Africa, west of Senegal — a distance of nearly 3000 miles.

The D4C beacon runs 20 W and is about 750 meters above sea level. Pederson was able to confirm the transmission with the beacon operator, HB9DUR. He was using a Kenwood TS-2000 and two 13 element Yagis.

“I had parked my VHF array pointing west for minimum wind resistance,” Pederson told ARRL Propagation Contributing Editor Tad Cook, K7RA. “Tuesday evening [May 5] I was doing some paperwork in the shack and rotated the beams back east at 0100 UTC to prepare for listening all night. To my amazement, I started copying CW while the beam was still 30° off the D4C bearing.”

Later in June of 2015, NP2X received signals from a German ham visiting Cape Verde one night, and a couple of nights later he was heard by the German visitor on D4, but unfortunately no two-way contact was made.

At the time in 2015, the D4C contest site was unmanned for most of the time but in later years remote operation become possible. The reception report by PJ4VHF showed that a trans-Atlantic sea path by tropo on 144 MHz was possible and this encouraged others to make the effort.

The first trans-Atlantic contact on 144 MHz between Cape Verde and the Caribbean took place four years later in June of 2019.

More details about the various trans-Atlantic contacts on 144 MHz can be found here... https://ei7gl.blogspot.com/p/144-mhz.html

Thank you John for this recognition. 73 HB9DUR