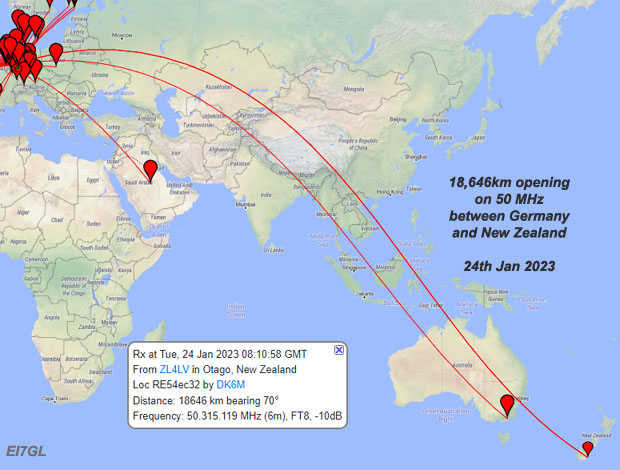 As far as I know, both parties managed to complete a FT8 contact. The FT8 signal from the ZL station peaked at -5dB in Germany.

The first thought of course is if the path is genuine? VK3WE in the SE of Australia also heard DK6M so there was a path open to that area. See Addendum below for a report from DK6M. 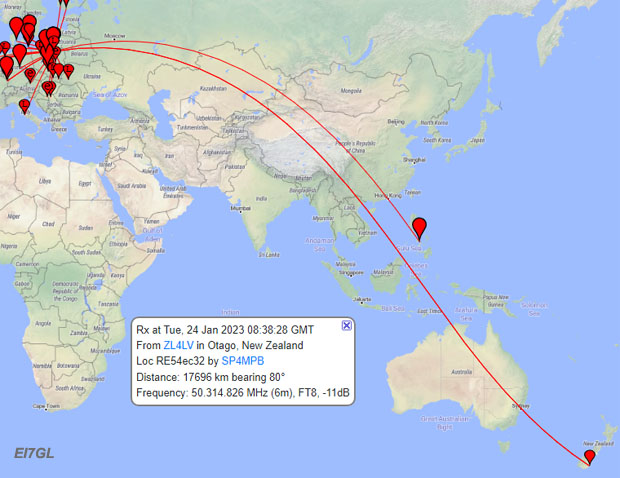 Analysis... So what is going on? Why the short openings on 50 MHz? 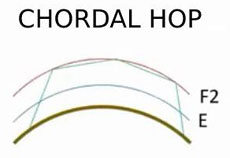 I suspect that the propagation mode was via Chordal-Hop with the signal going from F2 layer to F2 layer without reflecting off the ground in between.
It's a bit like shining a flashlight at a series of mirrors... the more reflections then the smaller the spotlight at the far end.
It's likely that the footprint from this Chordal Hop propagation after multiple hops at 50 MHz is probably very small and it would be very easy to miss an opening.
If it wasn't for the fact that most of the 6m stations are listening and transmitting on the one frequency with a weak signal mode like FT8, these openings wouldn't be even noticed.
The take home message is that with the solar flux up around 200 at the moment, it's a bit like a propagation lottery. You might in the right spot at the right time, you might not be. You just need to keep checking the band at the same time as previous openings and see if there is anything there.
They don't call 6-metres the 'Magic Band' for nothing.
Addendum: Here is some of the back story of the Germany to New Zealand contact thanks to Mike, DH6JL
DH6JL is the owner of the DK6M callsign and was using this to call CQ on FT8 on 6m. After 3-4 periods, he received a call from ZL4LV in New Zealand. Initially the signal was so strong (for FT8) that he thought it was someone messing about. After holding back for 2-3 more CQ periods, he answered and completed the contact. DK6M got a -4dB report and sent -8dB.
After the contact, Mike closed the JTDX software and opened MSHV and started to call ZL4LV with his own personal call (DH6JL) as this would be a new DXCC and locator.
Peter, ZL4LV had started to call CQ DX in the meantime but it was more difficult this time. After 6 to 8  periods of calling ZL4LV, he heard DH6JL and answered and the contact was completed.  DH6JL sent -5db and received -11db. 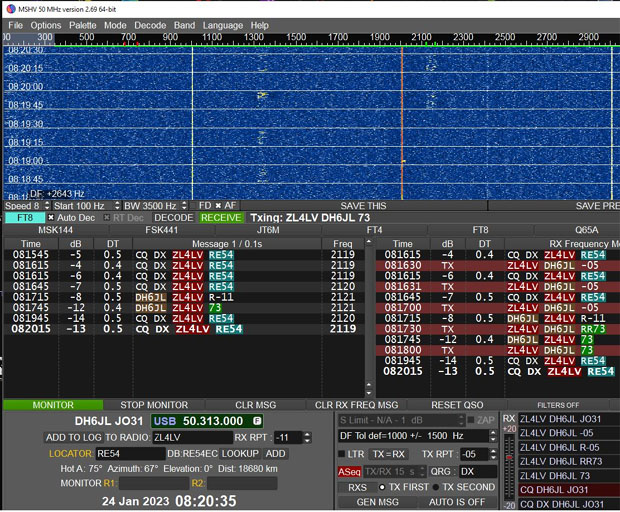 DH6JL started to call CQ DX again and noticed that ZL4SY had also heard him. ZL4SY wasn't heard by DH6JL so no contact was made. Some minutes later, PSKReporter showed me that VK3WE and VK3BD had also heard DH6JL but again, there was no sign of them in Germany.
The duration of the 50 MHz opening was approximately 20 to 25 minutes with a lot of fading (QSB) and decoding problems also when the tones were "clear" to hear.
Mike reports that he did not hear the station in the Philippines who was also involved in this opening.
Mike writes... "As a conclusion, I have to say I am more then very happy to work twice nearly to the antipode of me. This event showed me that it was worth to wait such a long time and that in Solar Cycle 25, much has happened as I expected... Mike DH6JL / DK6M"
Posted by John, EI7GL at Tuesday, January 24, 2023