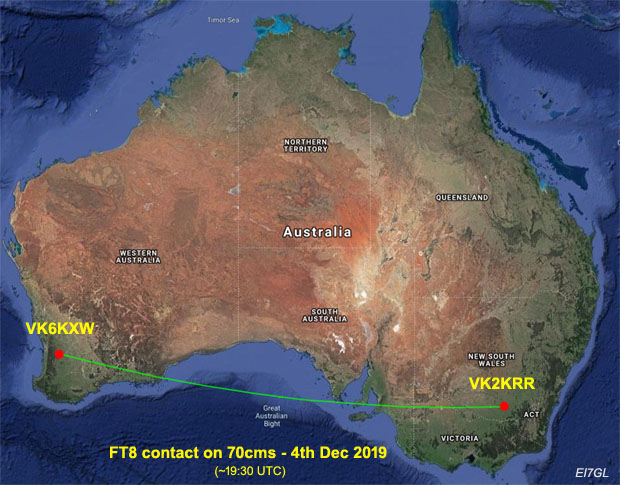 Early on the morning of the 5th of December 2019, there was a remarkable tropo contact between Leigh, VK2KRR and Peter, VK6KXW on 70cms across the Australian continent. The distance was 2,806 kms and crossed over the Great Australian Bight, a part of the ocean well noted for tropospheric ducting.

This was a new Australian record for a digital contact on 432 MHz as both stations were using the FT8 mode. The previous record was 2,793 kms which was set back in December of 2016.

The time of the contact was probably also a factor as tropo ducting is often at its best very early in the morning when the atmosphere has settled down and the sun hasn't risen yet.

The current non-digital record for the 70cms band in Australia is just a bit further at 2,862 kms. This was set between VK6KXW and VK7AC on the 17th of January 2019.

While examining both of these contacts, it can be difficult to relate to the distance of 2,806 kms and just how far it is. It might be useful for stations in Europe to remember that the distance from the west coast of Ireland to Newfoundland in Canada is 3,000kms, just an extra 200 kms.

Leigh VK2KRR has a nice website with plenty of VHF info, visit https://www.vk2krr.com/
Posted by John, EI7GL at Saturday, December 07, 2019