Back in early 2018, the 40 MHz (8-metre) band was allocated to radio amateurs in Ireland (EI) on a secondary non-interference basis. Since then, interest in experimenting on the band has increased and there are now a number of EI stations carrying out tests.

The latest EI station on the band is Stefan, EI4KU in Co.Clare in the west of Ireland. Stefan has kindly forwarded on some details and photos of his latest tests.

Equipment... Stefan has built a small 1-watt beacon running on 40.013 MHz and is carrying out propagation tests. The photo below shows the home made beacon and the associated antenna tuning unit (ATU). 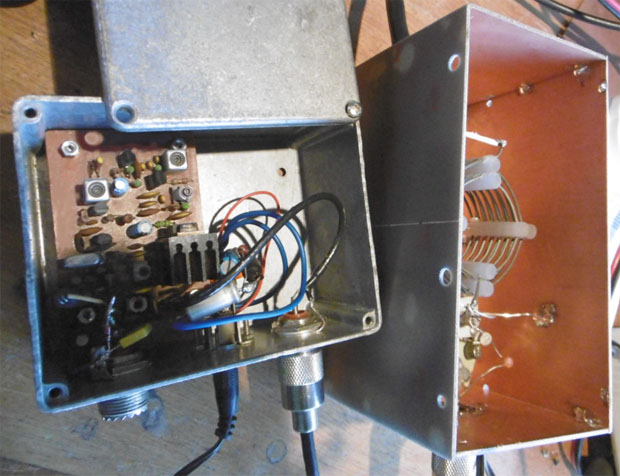 The beacon is using a crystal running at about 13 MHz and this is modulated by a varactor diode (FSK - Frequency Shift Keying). This is then tripled up to 40.013 MHz and is then buffered and amplified. The output transistor is a 2SC1970 running in Class-C with one watt after the low pass filter.

The signal is then fed into a home made Z-match ATU as shown below. 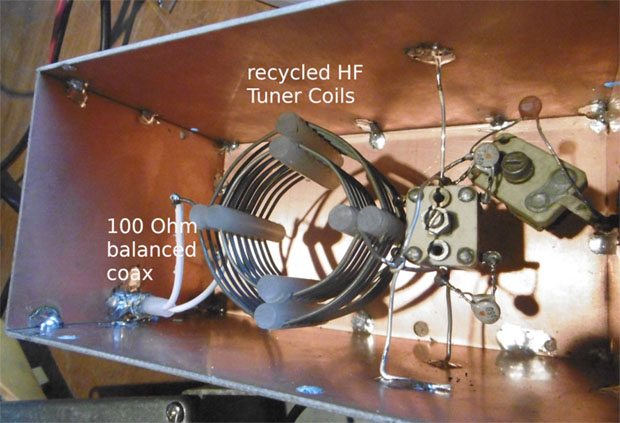 Unusually, 100-Ohm balanced coax cable is used on the output. This however provides a very good match to the antenna which is a single quad loop which would have an impedance of about 100 ohms. 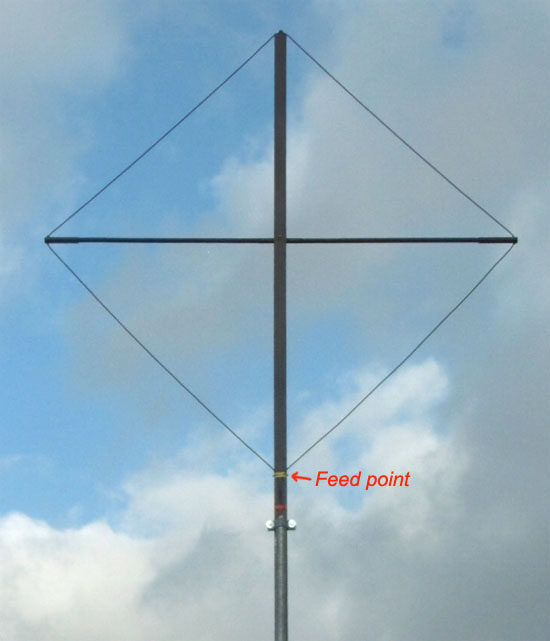 The photo above shows the quad loop. The sides are about 2 metres each and it is shown being fed at the bottom so it is horizontally polarised.

This photo below shows the view to the north from Stefan's location so it looks as if he is in a good spot for VHF.

Stefan is currently in the process of building a transverter for the band. If anyone would like to carry out some tests on the 40 MHz, EI4KU can be contacted via QRZ.

Tests... In November of 2019, Stefan carried out some tests with Phil EI9KP and Michael EI3GYB in Co.Mayo with the equipment shown above and both heard the CW beacon.

The waterfall display below shows the slow cw signal as received by EI9KP in Mayo. 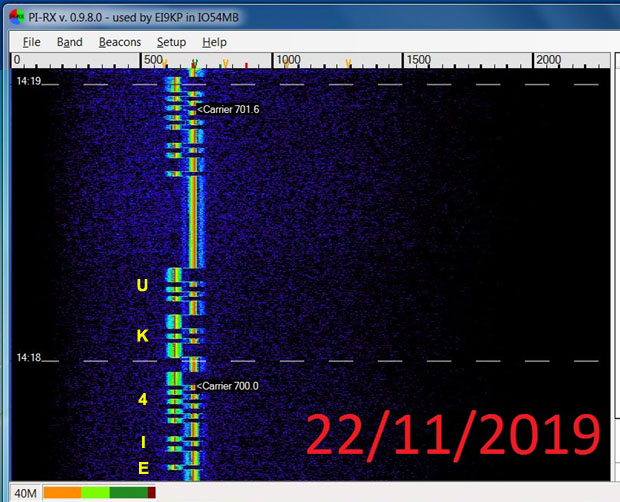 Interestingly, the signal over the 125 km path wasn't always steady. This second screenshot from EI9KP shows some multi-path distortion on the signal.

In an email, Phil EI9KP described it like this..."Screenshot attached showing reception of the beacon signal showing diffracted signal (wavey pattern). The signal diffraction is actually audible on the long carrier and it sounds like a wave building."

Phil also reports that he was using a horizontally polarised 2 element Yagi beam 5m above ground level for reception of the signal and it was RST 519.

EI3GYB... Michael, EI3GYB also reports that he heard Stefan's beacon from a distance of about 100 kms. Interestingly, Michael reports that there was a very slow fading on the band at times with the signal going from nothing up to 519. Most of the time, it was around 319 when the band was stable.

This mix of steady and fading signals would seem to concur with some of the reception reports that EI9KP experienced.

Michael doesn't have a dedicated antenna for the 8 metre band but instead was switching between a Sandpiper Moxon for 2/4/6 in horizontal position and a Windom antenna for 160 to 6 metres. According to Michael..."The Moxon was the best, although I had a period where I received nothing via the Moxon, but a 5/1 signal on the Windom."

It seems like that the 6m part of the Sandpiper Moxon was probably acting as a shortened dipole on 40 MHz so the gain would be somewhat reduced.

Michael also reports having several contacts with Phil, EI9KP on SSB who is 25 kms distant.

Thanks to Phil, EI9KP and Michael, EI3GYB for their reception reports... de EI7GL
Posted by John, EI7GL at Sunday, December 15, 2019