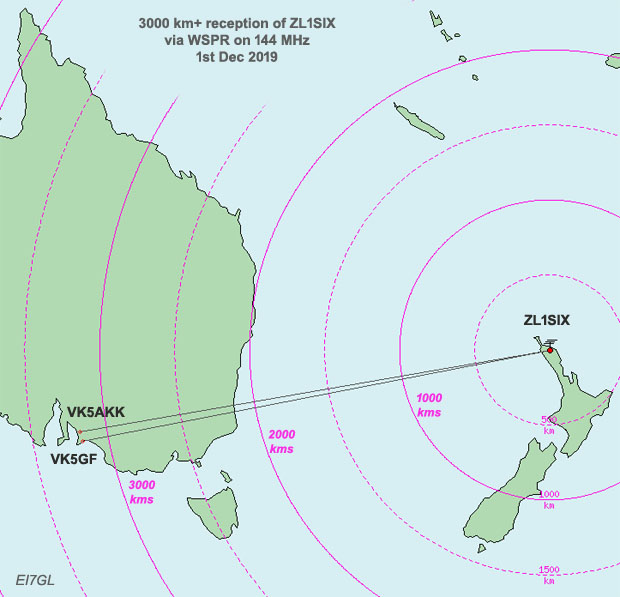 On the 1st of December 2019, there was an extensive Sporadic-E opening on 144 MHz in the south-eastern part of Australia. While this allowed contacts on the 2-metre band between various Australian regions, the most remarkable opening was probably between Adelaide (VK5) and the northern tip of New Zealand.

Both VK5GF and VK5AKK managed to hear the WSPR beacon ZL1SIX, a distance just over 3,170 kms and a remarkable distance for 2-metres. To explain that from a European perspective, that is the same as say London to Cyprus or across the North Atlantic from Ireland to Newfoundland.

Mode of Propagation???... Normally the maximum distance for one Sporadic-E hop is about 2,300 kms so this alone cannot account for the 3,174 kms covered.

There were other reports of some double hop Sporadic-E on 50 MHz between Australia and New Zealand so perhaps it reached as high as 144 MHz as well? While it is not impossible, it would be highly unusual.

Another possibility was that there was a single hop Sporadic-E hop from Adelaide to the east and then the rest of the path was via a tropo duct to the North of New Zealand. It's impossible to tell though.

Extract from the report on Facebook by VK2KRR... "Yesterday we had the BRILLIANT situation, where we saw a high MUF sporadic E area highlighted on 6m WSPR, which quickly escalated to showing 2m sporadic E paths going north and south across this area, also initially detected on 2m WSPR between VK7 stations and VK2, which is quite a high MUF down to 1000 km distance for some of the paths.

Since the first 2m Sporadic E opening found just over a week ago, we have found an opening on 2m almost every day! At this stage I am not sure if its because of all the signals and data being shown by WSPR operations that we have been able to better locate areas of high MUF sporadic E and make use of it, or if it's just an extraordinary series of events that's been going on.

I don't recall seeing such regular E openings on 2m here in the past, they are usually quite a rare thing." ... VK2KRR on Facebook.

Addendum... It looks as if another 3000km plus path opened up again on the 6th of December 2019 in Australia. 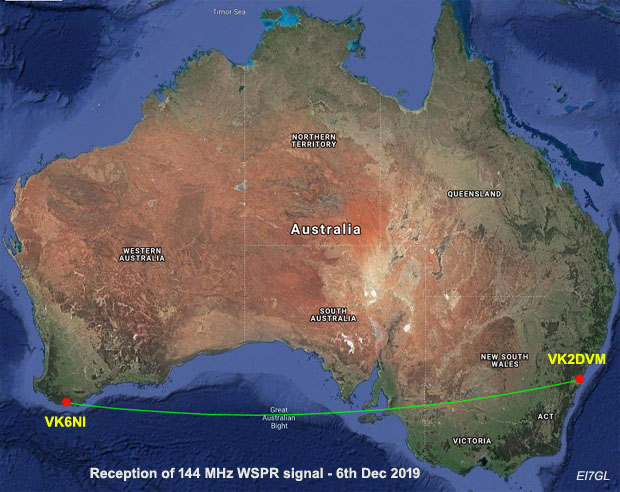 This time, the WSPR signal of VK2DVM in Sydney was heard in the south-west corner of Australia, a distance of some 3,102 kms.

Note the signal... -27dB! This shows the value of WSPR in that it allows the discovery of paths on the VHF bands which would have gone unnoticed before.

As for how, it was most likely a mixed Sporadic-E and tropo signal. i.e. One Sporadic-E hop from VK2DVM so that the signal reached the Great Australian Bight and then via a maritime tropo duct to VK6NI.
Posted by John, EI7GL at Monday, December 09, 2019

If you check vk records on the Wireless Institute Website you will find many 2m records approaching and exceeding 3000 km including vk5 to zl2 recird of 3400 km.
we think nothing if working zl on tropo and es.
we also had fk8 three years back on es.
and 432 mhz out at 2500-3000 km.
cheers
vk3zaz

FB also on the WIA records. I think the key point is that the tropo ducting is responsible for a large part of those long distance contacts.

I'd suspect that double hop Sp-E is not responsible on 144 MHz at all.

Contacts or path detections on any mode >3000 km, 144 and above, is rare from VK2, particularly from the eastern seaboard. In more than 60 years of recorded history only two ssb contacts from vk2 to vk6 (double hop Es) and no contacts made to any of the pacific islands >3000 km from VK2. On the other hand plenty of tropo and Es every summer to ZL up to 2400km.