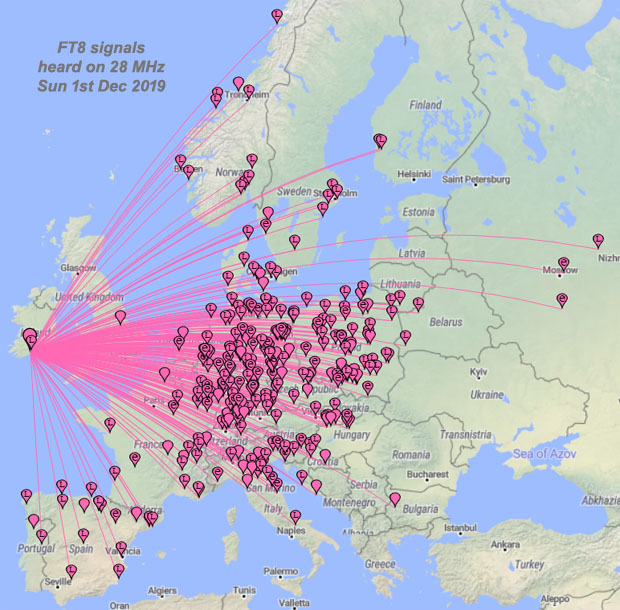 There was a pretty good mid-Winter Sporadic-E opening on 28 MHz on Sunday the 1st of December 2019 with the band open to most of Europe. A total of 291 stations in 26 countries were heard which is on par with a good day in the middle of the Summer.

It looks as if most of the signals were single hop Sp-E although the one in Bulgaria and the three in Russia were probably double hop.

The most interesting signal was the one that didn't get uploaded to the PSKReporter website and hence, isn't on the map.

AK4QR is in Alabama and it looks as if there was a Sp-E opening from his location to the NE of the USA. There is no sign of any other European station hearing him, just me.

As for the propagation mode for that one signal I heard? Multi-hop Sp-E? Was there some F2 involved?
Posted by John, EI7GL at Sunday, December 01, 2019

hi, was an interesting day for sure. lots of SSB activiity just like Saturday.
A couple of VK stations popped up for a dutch station in the afternoon and F4vpc was receiving WQ3X @1600 whilst a close neighbour of his was in qso with the USA.
All i managed was to get called by a PY after i walked out of the shack..lol
73 stu

You'll never know John, 10m seems to be the new magic band these days. I made 2 QSOs with VK this morning and received a few more. 73, Bas

Hi Bas
it must have been you (the dutch station) sri i did not remember the c/s.
i did swing the antenna around when you spotted it, more in hope though...lol
grats on the VK qso's.
stu

That's excellent Bas, Europe to VK on 28 MHz is always special. What makes it even more interesting is that it was the south-east part of Australia and not the west coast.

I'd suspect that the F2 MUF at lower latitudes is much higher and the Sporadic-E at one or both ends connect to that. Still though, VK at the bottom of the sunspot cycle on 28 MHz is still special.

Stu, thanks for the report. It seems like others were hearing N America as well albeit from a more southerly location. As Bas said, 10m is the new 'magic band'! :o)

VK was quite strong at 12m yesterday, also. I was at the outer edge of the propagation, but southern UK stations were getting through.