Baofeng UV5R is banned for sale by German authorities 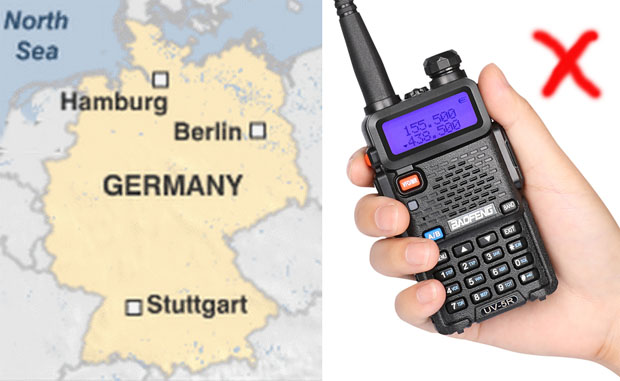 The Baofeng UV-5R is a hugely popular handheld radio covering both the 144 and 432 MHz bands and is usually available for a very low price.

It is also well known for not being the cleanest of radios transmit wise with many spurs which aren't that far below the fundamental signal which can be a potential source of interference to other services.

On the 24th of November 2021, the German authorities announced a ban on sale of this radio.

Official Journal of the Federal Network Agency for electricity, gas, telecommunications, post and railways
22 2021 - regulation, telecommunications - 1457
Ordinance No. 91/2021
Law on the provision of radio equipment on the Market (Radio Equipment Act -FuAG):
General decree regarding a sales ban for a machine
As part of the market surveillance according to the FuAG, the Federal Network Agency pointed out that the below named device does not comply with the requirements of the FuAG.
The Federal Network Agency issues on the basis of Section 23 Paragraph 2 No.4 i. V. m. § 30 Paragraph 3 FuAG the following
General decree:
1. The further provision, placing on the market and the passing on of the device listed below is prohibited.
Information about the device:
Product Type: Radio
Device type: radio telephone
Model: UV-5R 5W HT
Trademark: BAOFENG
Importer: Agnieszka Bastek Demo Bis, Warsaw
2. The general ruling is deemed to have been announced on the day after its publication.
Reason
I. The Federal Network Agency was informed in accordance with Section 30 (1) FuAG that a member state of the European Union has taken a market-restricting measure in accordance with Article 40 of the Radio Equipment Directive 2014/53 / EU.
The responsible market surveillance authority Urząd Komunikacji
During a hearing, Elektronicznej in Poland asked the importer to send him the declaration of conformity and the technical documentation for the device. A corresponding receipt of a declaration of conformity was recorded will.
During the administrative check by the responsible market surveillance authority, it was found, among other things, that the declaration of conformity was incorrect and did not meet the requirements of the Radio Equipment Directive 2014/53 / EU.
The device was also a metrological one
Subject to examination. The metrological investigations of the Measurement laboratories show that both the requirements of the EN
62209-2: 2010 as well as EN 60950-1: 2006-1 not complied with will. The parameters were also set according to the specifications of
EN 301 489-1 V 2.2.0: 2017-03, EN 30I 783 V2 I.I and EN 301 489-15 V 2.2.0: 2017-03 not complied with.
The Federal Network Agency has checked in accordance with Section 30 (1) FuAG,
that the measure is justified because the Polish market surveillance authority has not been presented with a proper declaration of conformity or technical documentation, as well as other labeling deficiencies, such as the lack of it the declaration of the importer.
II.
After the adoption of this measure, the other European Market surveillance authorities and the relevant European Commission according to Article 40 of the Radio Equipment Directive 2014/53 / EU informed about this on August 2nd, 2021.
With the official gazette no. 239/2021 of 08.09.2021 the national economic actors according to § 30 paragraph 1 FuAG informed about this measure and were able to do so within a Submit an opinion on this within four weeks. The Federal Network Agency has not received any comments.
As no objections were raised either by other European market surveillance authorities or by the European Commission this measure is deemed to be in accordance with Section 30 (3) FuAG justified.
The measure taken is in accordance with Section 30 (3) FuAG im To publish the official journal of the Federal Network Agency.
Legal appeal: An objection can be raised against this ruling within one month of its announcement. The contradiction is at the Federal Network Agency, Tulpenfeld 4, 53113 Bonn or at a to insert another agency of the Federal Network Agency.
Objection and legal action against the decision made above have no suspensive effect according to § 36 FuAG. It is used to process your objection quickly,
if it is submitted to the Federal Network Agency, Referat 412, Canisiusstraße 21, 55122 Mainz.
Link...
1) The original document in German can be downloaded HERE (24-11-2021)
Posted by John, EI7GL at Friday, November 26, 2021

Technically, as stated further down in the text, the Polish authorities checked whether the documents presented by the importer were correct. When doing actual measurements, they found the radios to be non-compliant with regulations, issued a sales ban and informed authorities in other EU countries such as Germany. These then confirmed the Polish findings and also issued a sales ban.

Amateurs have also done some tests of that radio, and seen the same. I have a few of those, but stopped using them as-is. With proper filtering they could still be used legally by amateurs, as quick test signal generators, base for transverters or frequency multipliers.
As hand-held radios? Not good.
These radios are also older Chinese radios, made before they had sufficient quality control, most likely.
I expect that newer Chinese radios are already better, and when they get the production and testing/quality control done properly, they will be as good as radios made in Japan or in the West.
Vy 73 de Jan, OZ9QV

Can you give me the source for this release? - Ria, N2RJ

Busy day yesterday. I have the link up now at the bottom of the blog post to the original document in German. Look for 24-11-2021.

I can't find any information about it at https://www.bundesnetzagentur.de/

The Swiss Bacom banned the radios already some time ago.

The Swiss case related to the ability of the general-purpose transceivers to transmit on frequencies used by other services.
There is no problem when the rigs TX locked to the amateur bands. I believe the FCC did something similar??