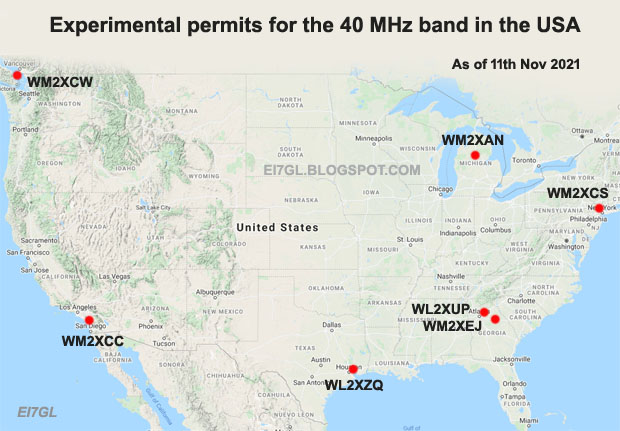 18th Nov 2021: In previous posts, I detailed how some amateur radio stations in the USA had managed to obtain special experimental permits to operate on the new 40 MHz band.

The first 40 MHz permit WL2XUP near Atlanta was issued back in June of 2021. See this previous post.

The second permit WL2XZQ near Houston was issued in August. See this previous post.

As of mid November 2021, there are now seven experimental permits for the 40 MHz and these are shown on the map above and in the list below. An eight from Alabama is pending. 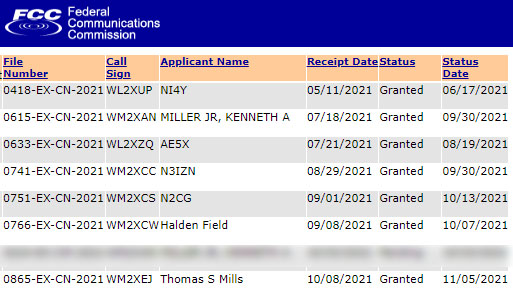 The permit allows for experiments in the frequency range of 40.660 to 40.700 MHz which is the 40 MHz ISM band (Industrial, Scientific, Medical).

The permits allow ERP powers in the region of 100-400 watts and the license lasts for two years.

Propagation: If you examine the map above, you'll note that the distances between the various experimenters.

WM2XCW is the far north-west of Washington state is 3150kms from Houston and 3900kms from New Jersey.

It is highly unlikely that tropospheric propagation will contribute much to the experiments. The distances for aircraft scatter are also likely to be too far. Some in the 500-1200km range may manage to complete contacts with digital modes like MSK144 with meteor scatter.

The real workhorse on the 40 MHz band is going to be Sporadic-E. There may be a few openings over the next few months but things will really get going at the end of April 2022. At that stage, the experimental stations will have had time to get their radios and antennas ready for the band and I'd expect that contacts in the range of 800 to about 2200 kms will be common with something in the region of 1700kms being the most common distance.

In the second half of May 2022, double hop Sporadic-E openings will become more common and at that stage, contacts from the west coast to the eastern half of the USA should be possible.

Crossband: Just like in Europe, there are likely to be crossband contacts from 40 MHz to 28 MHz and from 40 MHz to 50 MHz with those who cannot transmit on the 8m band.

Someone doesn't need an special 40 MHz permit to take part in the experiments. The experimental stations are likely to be using SSB, CW, FT8 and WSPR and I'm sure they would like to make as many crossband contacts as possible as well as receiving any reports of their transmissions.

Analysis: It's great to to this surge in interest in the 40 MHz band in the USA. The 8m band is NOT just another band. It is halfway between the 28 MHz and 50 MHz bands and it can be useful for exploring just how high the maximum usable frequency (MUF) goes as the solar activity increases as we head towards the sunspot maximum.

For example, it would be interesting to know what kind of solar flux/sunspot number is required before there are east-west openings between say California and the eastern part of the United States.

It would be really nice if some stations in South America were able to listen on the 40 MHz band and then try to complete some crossband TEP contacts with experimental stations in the southern states of the USA.

Are there any EU WSPR stations set on a specific frequency?