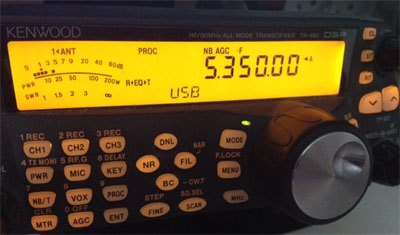 The Irish Radio Transmitters Society have just announced that Irish radio amateurs can use the WRC-15 band of 5.3515 MHz to 5.3665 MHz with immediate effect. No application is necessary and the power limit is 15 watts. This is very good news for anyone with an interest in the 60 metre band.

The following was announced by Séan, EI7CD...

ComReg has just today published an amended version of the Amateur Station Guidelines in Document ComReg 09/45R2. The main revision is that the WRC-15 band of 5351.5 to 5366.5 kHz has been released with immediate effect on a secondary basis. No application or fee is necessary for this segment. The power is 15 watts PEP (12dBW) measured at the output of the transmitter or amplifier. All modes including digimodes may be used. The WRC-15 decision was for 15 watts EIRP and this will be taken up with ComReg. The Society recommends that USB be used for voice as has been the convention on this band and as used by the primary user and that the provisional IARU band plan be used:

This allocation does not affect the availability of the existing channels centred on 5280, 5300, 5332, 5348, 5400 and 5405 kHz. Special authorisation is still required for these channels at an annual licence fee of €30. Lets hope for some more activity on 5 MHz to help our case for an increased allocation.

The relevant document can be downloaded from the Comreg website HERE

For the moment, the Irish allocation is different from our neighbours in the UK. See HERE