Proposed changes to the 70 MHz Band in Ireland

This is the current IARU Region 1 band plan for 70 MHz band... 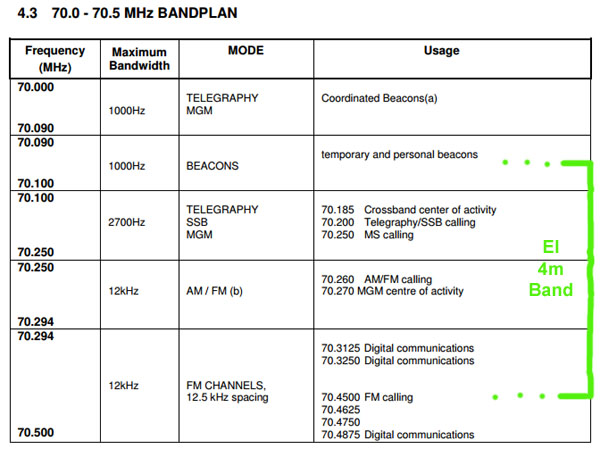 What it has meant is that the UK calling frequency of 70.450 MHz is actually on the limit of the Irish band. If any EI station were to transmit there on FM then their side bands would be outside the Irish allocation.

The most recent newsletter from the Irish Radio Transmitters Society carried details on submissions that had been made to Comreg, the Irish licensing authority. While many of the submissions were declined, it was obvious that Comreg was using European Common Allocations as their guide. i.e. if the European agreements said something about the amateur radio service then that's what they were likely to implement.

As regards to the 70 MHz / 4 metre band, they are guided by footnote ECA9 in the CEPT European Table of Frequency Allocations.

This is what the International Amateur Radio Union (IARU) said about ECA9 / EU9...

The 70MHz band is increasingly recognised as being appropriate for amateur allocations. In the CEPT area this progress is now recognised in the European Table of Frequency Allocations by Footnote EU9 which states:
EU9: CEPT administrations may authorise all or parts of the band 69.9-70.5 MHz to the amateur
service on a secondary basis. In addition it is worth noting that there is some experimental access on a national basis in the range 69.90 - 70.0MHz in cases where 70MHz is not available.

In response to the IRTS proposal, Comreg said the following about 70 MHz...

"Comreg's work plan for radio amateur services is to make available the following bands:
. the 30-49 MHz and the 54 - 69.9 MHz and 69.9 - 70.125 bands to facilitate propagation beacons, digital amateur television repeaters and to align current allocations with those in the European Common Allocation Table: and
. the 70.45 - 7-.50 MHz band to align it with the European Common Allocation Table.

This is how the new Irish allocation will look now compared to other countries... 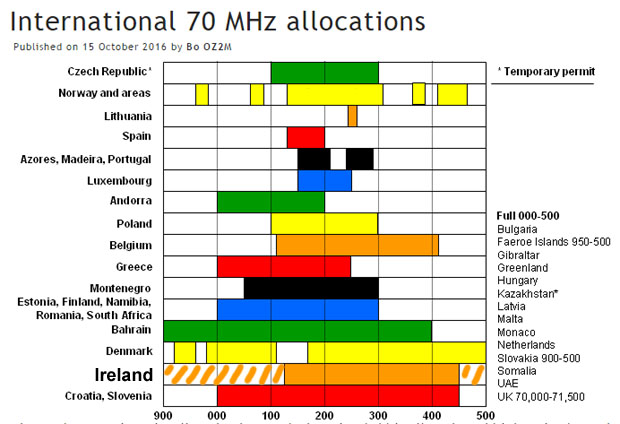 As can be seen, Irish stations will now be able to work other countries simplex without having to resort to split frequency operation.