I could see one of the big English stations spotted on the cluster and I could hear them weakly in the noise on SSB, probably as a result of some meteor scatter.

Around midday, I heard a weak cw contest station... GW5B or so I thought. Checked the cluster but no sign of that one. But ZW5B was spotted on that frequency and sure enough when I listened more carefully, that's what it was...ZW5B in Brazil! ...F2 propagation on 10m.

Within 20 minutes, more signals popped up on the band and some were pretty strong...up to s'7' at times. The following were worked on cw with 50 watts into the vertical...EA8AH & EA8CN in the Canary Islands and FY5KE in French Guyana. All of these were probably via F2 propagation. It seemed to be a pretty short opening...maybe an hour or two with the occasional strong signals for about 30 minutes.

I left the rig then on WSPR and heard the following weak signals via Sporadic-E during the afternoon on 28 MHz... 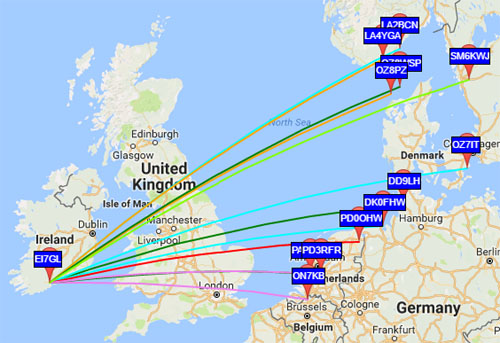 What was unusual was that I seemed to be hearing a lot more than the stations in England. Like yesterday, it was the fact that I was a lot further to the west than them which allowed me to hear the European stations shown above.

What I have also noticed about WSPR is that there are a lack of stations on 28 MHz. For example, today there were 4 from Spain, 3 from France, 3 from Italy and none from Poland. These are major European countries and very few were active. I was the only person in Ireland. Yet if you check say 14 MHz, there are plenty of stations there but it is questionable if a lot of those reports are of any real value to anyone.
Posted by John, EI7GL at Sunday, December 11, 2016