In April of 2018, Irish (EI) radio amateurs gained access to much of the low VHF spectrum including 40 MHz. Some short distance contacts were established in November of 2018.

Over the winter months, several EI stations have been busy getting ready for the new 8-metre band and this has now resulted in more inter-EI 40 MHz activity.

Thanks to Phil EI9KP in Co Sligo who has sent on the info on all the activity.

Both Phil EI9KP and Tim EI4GNB run manned beacons on the band. Over the weekend of Saturday 25th and Sunday 26th of May 2019 , they both managed to hear each others beacons at a distance of about 208 kms. 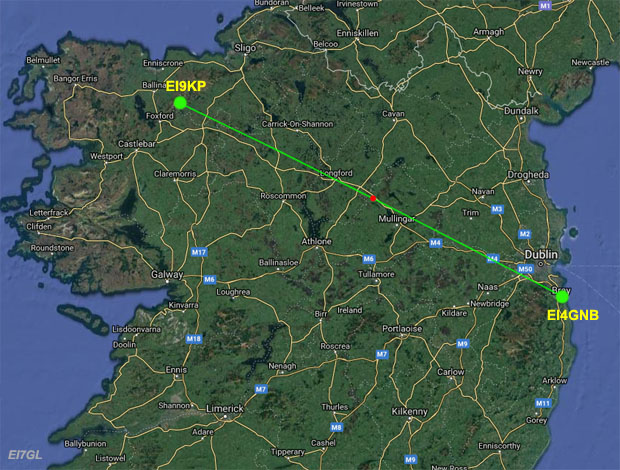 This is all the more impressive as the Dublin mountains block a lot of the signals from the west of Ireland getting into Bray where EI4GNB is located.

In EI there are two manned beacons running i.e. On air when supervised in the shack.  Info below by coincidence Tim and I are using the Yaesu FT-857D in ‘beacon mode’ for this purpose. An interesting set-up which allows us to switch to SSB for in band and cross band QSO.

Saturday 25 May 2019:  Listening on 8m band I heard fragments of CW on 40.300MHz, some searching on the web pointed me to EI4GNB and I asked him to turn the antenna north west and  confirmed report 515 via KST Chat.  I activated my beacon on the same frequency and he confirmed report 555 after a few trials due to local QRM.

Propagation type?  Was it purely ground wave (diffracted) or tropo or something else?  We are not sure, the distance is a good 205km.  Tim reports experiencing similar propagation on 6m receiving EI3KD from time to time.  I’ll be watching his beacon signal over the next month or so.

The next day, Phil managed to make a two way SSB contact with Andrew EI3FEB in Co Galway, a distance of about 65 kms. 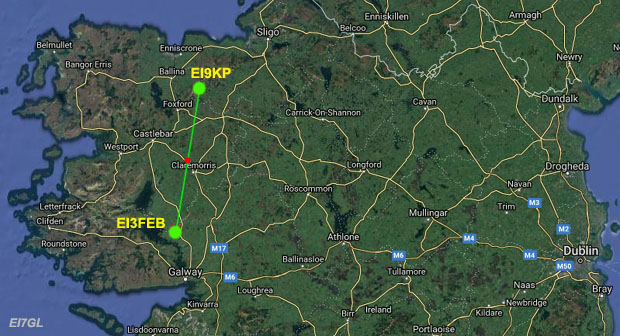 Sunday 26 May 2019:  I had a sked with Andrew EI3FEB in Headford, Co. Galway (locator IO53KL).  On a test previous week on 40.250MHz we could not make contact, not even hearing a blip, it appeared our antennas were not correctly aligned for ground wave.

Both Andrew and I are using a Delta Loop in Horizontal Polarisation;  the delta loop has a noticeable null on the tips, this time we were aligned broadside.  Success:  a 2-way SSB QSO with 5/1 reports both ways.  Distance is 65km, diffracted signal (one hill in the path).

If you are in the UK, have listen for the beacons if there is tropo about. Likewise, these signals should be easily heard on the continent when there is Sporadic-E. 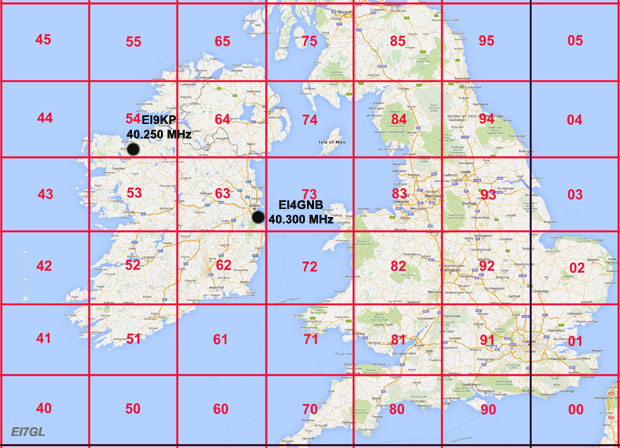 Both EI9KP and EI4GNB can be contacted through their respective QRZ pages. Also look for them on the ON4KST chat page.

More information about the new 40 MHz band can be found here... https://ei7gl.blogspot.com/p/40-mhz.html 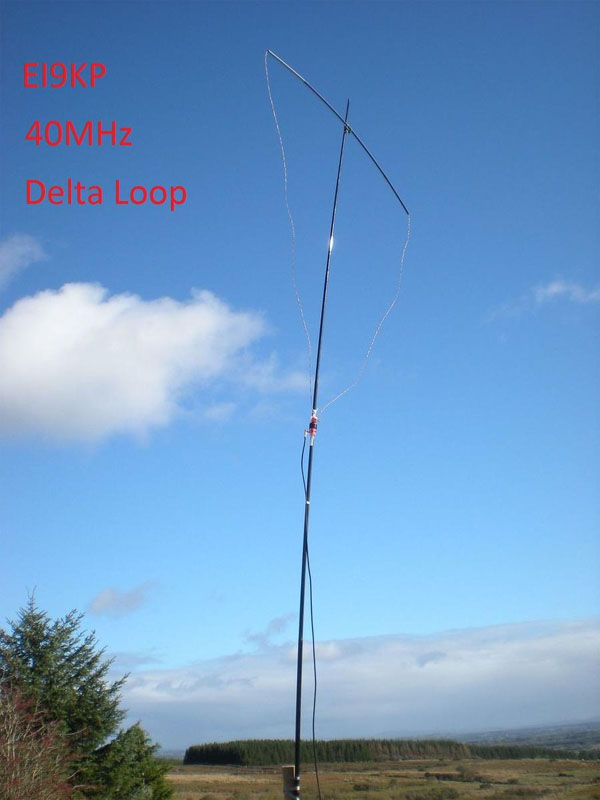