Back on the 26th of April 2019, I had a post up about the signal from KI5BLU in Texas and how unusual it was that he was being heard in Europe on 28 MHz. It was pretty obvious at the time that he couldn't have been transmitting from Dallas, Texas.

Fast forward to today Sunday the 26th of May 2019 and KI5BLU has made a re-appearance on the 28 MHz band.

At about 20:00 UTC, I was checking who I had heard on FT8 on 28 MHz. I noticed that there was a single line heading off to the west to none other than KI5BLU. 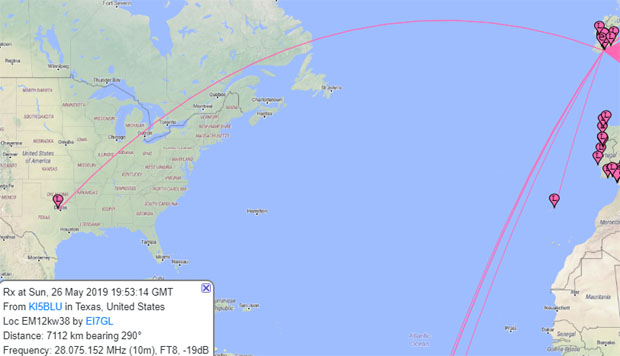 When I see lone signals coming from the USA, I get suspicious.

I noticed that G8IXN in Cornwall and MW0ZZK in the NW of Wales had also heard him. And sure enough, neither of them had heard any other station from the USA at that time.

Just after I had heard KI5BLU, I checked the sent-receive list for KI5BLU for the last 15 minutes... 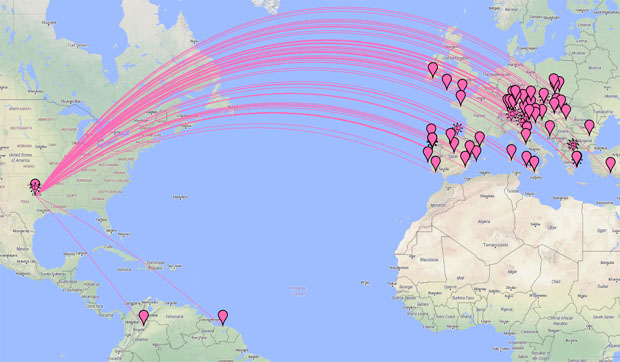 Notice how no-one in the USA was hearing him! Wherever he was, KI5BLU certainly wasn't transmitting from Dallas, Texas.

I then had a look at one of the locals in Dallas...KG5SW. He was hearing other local FT8 stations on 28 MHz around Dallas but not KI5BLU. Again confirming that KI5BLU was not transmitting from Dallas, Texas.

I then checked KP4EJ in Puerto Rico and what he had heard. Again, he heard KI5BLU and no-one else from the USA. He was also hearing European stations so that again confirms that there were conditions from this part of the world. 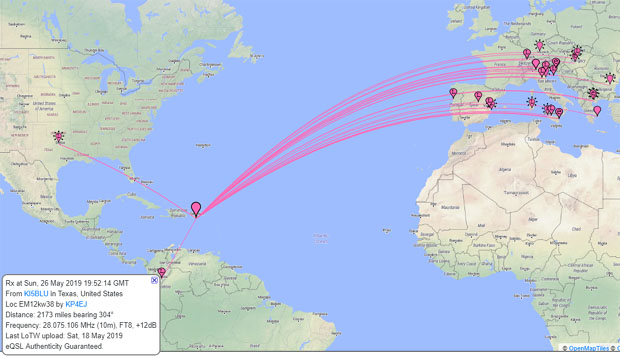 At this stage, it was obvious that KI5BLU was not transmitting from the USA but was giving out his callsign and locator on 28 MHz FT8 as if he was.

Then lo and behold, the sent-receive map for KI5BLU changes completely about 30 minutes later. All the US stations appear and Europe disappears. Notice the skip zone around Texas also. 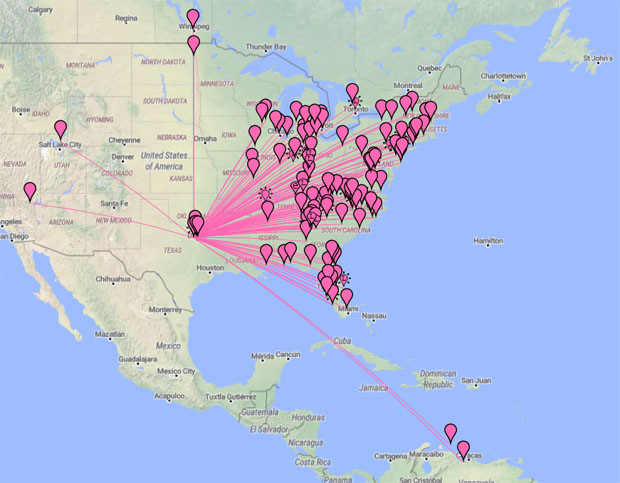 Conclusion .....KI5BLU would seem to be using a remote station, possibly in the Caribbean. He is using his US call and locator which is confusing people when they hear and work him. They think the band is open to the USA when it's obviously not.

When KI5BLU was being heard in Europe, he was on the remote station.

When he logged off the remote station and used his own station at home, all of the US stations appeared on his list.

I'm not sure what the legal situation is but I would have thought that there would be a requirement to use the proper callsign when operating remote from another country?
Posted by John, EI7GL at Sunday, May 26, 2019