FM radio station on 90.7 MHz near Quebec is heard across the Atlantic in Ireland - 21st June 2021 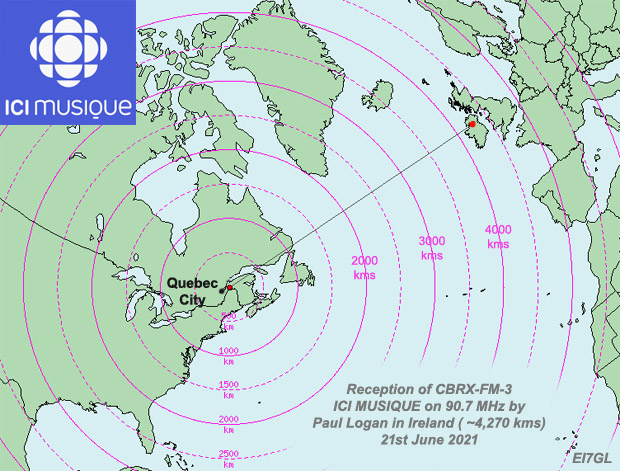 21st June 2021: This was a remarkable day for VHF propagation with a very rare trans-Atlantic opening on the 88-108 MHz FM band.

As outlined in a previous post, Paul Logan in the north of Ireland managed to hear a radio station from Greenland on 88.5 MHz from roughly 13:00 to 14:00 UTC on the 21st of June.

Near the end of this opening, Paul also managed to hear a radio station near Quebec in Canada, a distance of approximately 4,270 kms !

The radio station in question was the 100 kilowatt transmitter of CBRX-FM-3 ICI MUSIQUE which is located at Riviére-du-Loup just to the east of Quebec City in Canada.

A short audio clip from Paul is embedded below...

This second clip which is very noisy is of weak music and a woman speaking in French.

Paul was able to listen later to the podcast version of the show online and it matches what he heard on the radio.

Additional info: Paul Logan near Enniskillen in the north of Ireland is an avid DX-er and has logged hundreds of radio stations on the 88-108 MHz FM band over a period of 20+ years. For the reception, Paul was using a ELAD FDM S2 SDR receiver with a Band 2 9-element Yagi 8m above ground level. 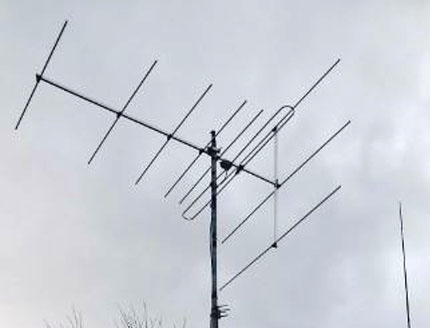 Analysis: With the opening to Greenland and now the 4270 km opening to Quebec, it looks as if this was a very rare Band 2 double hop Sporadic-E opening across the North Atlantic.

While it it quite common for signals on say the 50 MHz band to cross the North Atlantic, the maximum usable frequency rarely reaches as high as the 88-108 MHz FM broadcast band.

Paul Logan has logged more of these trans-Atlantic Band 2 VHF openings than anyone else and this was only his 7th opening to North America in 20 plus years of listening.

As of 2021, not one single person in North America has heard a Band 2 radio station from Europe. Why?

Wow! Congratulations to Paul. And to you, John - always the more interesting blog posts online!

As for 144MHz, well... At least it reinforces my view that too many people are pinning their hopes on tropo. Es is by far the most likely to carry it.