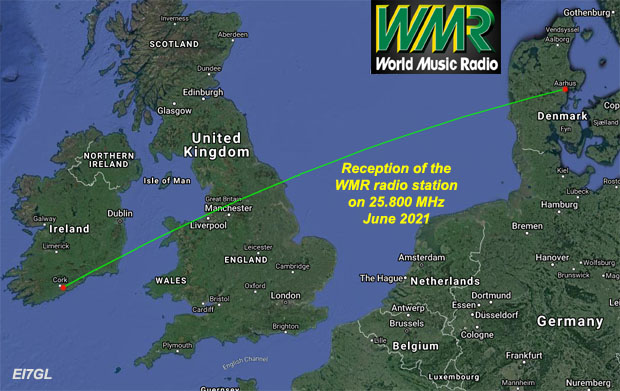 16th June 2021: I noticed a post on my Facebook feed yesterday about a Danish station transmitting on 25800 kHz on the 11m broadcast band. I really don't have much interest in short wave stations but this one caught my attention as it is reasonably close to the 28 MHz band.

Today, I noticed I was hearing OZ7IT in Denmark on WSPR on 28 MHz via Sporadic-E propagation with a good 0dB signal. I then checked for the OZ7IGY beacon on 28.271 MHz and sure enough, it was there.

When I checked 25.800 MHz, the World Music Radio station was there on AM with a signal strength of about S '5' to '8' with a lot of fading. The distance was in the region of 1300 kms to my location.

In response to a question, they said that they were running 100-watts into a vertical antenna on top of a tall tower. Photo at the end of this post.

Sporadic-E propagation: If anyone wants to have a listen during the Summer Sporadic-E season (May to July), I have put together a map showing the likely range. 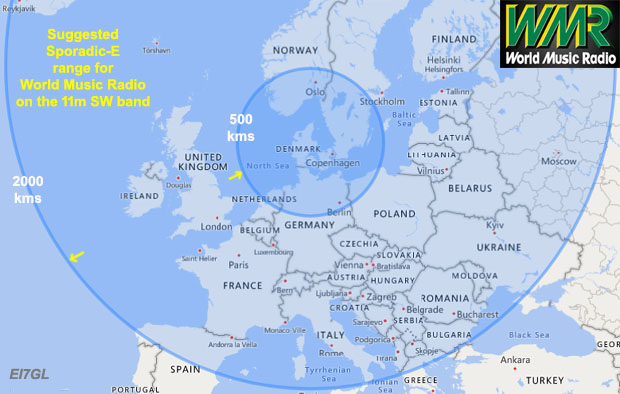 In conclusion: Putting a short wave transmitter on 25800 kHz near the bottom of the sunspot cycle seems like a strange choice. It will probably be a few years before there will be consistent F2 propagation at that frequency and even then, 100-watts on AM will only go so far.

The 11-metre broadcast band is an unusual band with very few stations on it and many of the typical small portable radios don't cover it.

Yet for all that, it's interesting to see if it can be heard. I'm thinking already if that nice 100-watt carrier could be used for meteor scatter tests! 😂

If you hear Danish stations on 28 MHz then have a listen and you should be able to hear it.

I'm listening to it now in central Italy, a very variable signal