Normally, a reception report of a station at 1700km on the 144 MHz band isn't all that special as we're in the middle of the Summer Sporadic-E season but I found this one of interest. 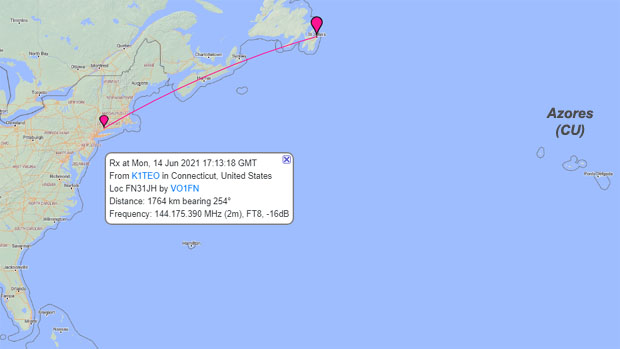 13th June 2021: The VO1FN station at St.John's, Newfoundland was set up to monitor the 144 MHz for Trans-Atlantic signals. On the 13th of June, it heard a FT8 signal from K1TEO in Connecticut in the USA.

The distance was just over 1760 kms which is pretty typical for Sporadic-E or meteor scatter at 144 MHz.

This is the tropo prediction map for the day from Pascal, F5LEN... 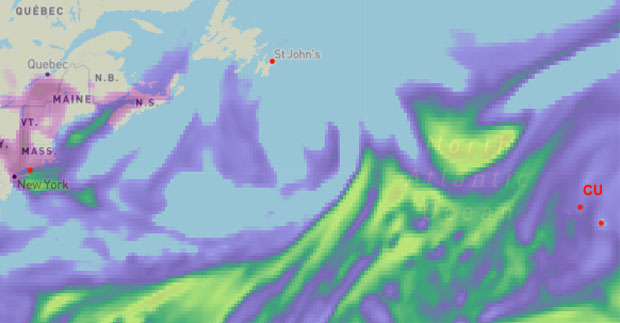 It shows some enhancement on the 1760 km path but probably not enough to explain the propagation mode.

Propagation Mode: Frank, VO1HP outlined in the update at the end of this post how the signal was heard off the back of the beam. As there was just one decode, I don't think it was tropo. If it was meteor scatter then it required a burst that was at least 15 seconds long. The other option was a very short Sporadic-E opening.

My interest in this reception report is how it compares to the distance from Newfoundland to the Azores Islands. 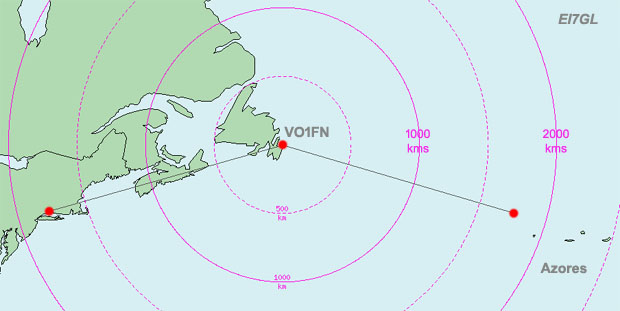 As you can see, the distance to the Azores is just a few hundred kms.

It's my opinion that proof of a 144 MHz path between Newfoundland and the Azores would be a valuable first step in the eventual goal of a Trans-Atlantic 144 MHz contact on 2-metres. I think this is most likely to happen between the north-west of Spain / Portugal and either Newfoundland or Nova Scotia in Canada.

Update 16th June: VO1HO informs me that K1TEO was using 1 kilowatt to a 4 x 9-element Yagi array at 25 metres above ground level.

Hi John
Many thanks for posting the announcement of the decode of K1TEO. My wife and I were away for the weekend and I left the Beacon SDR running listening on 144.174Mhz FT8 I usually check-in to the PC running WSJT-X, using Anydesk, several times during the day but neglected to do that on Sunday Jun 13 as were travelled in a remote area.

When I logged in on Jun 14 I discovered the decode . The actual time stamp for the recording made by WSJT-X is 20210613_101845.wav - K1TEO was operating that morning in the VHF Contest. The dual Innovanteena 5el LFA-Quagi's were pointing towards Ireland so the decode at -15db was off the rear of the antennas. I have received confirmation from Jeff K1TEO that he was operating at that time. He commented that he can easily work into Nova Scotia on 144Mhz. St.John's NL is over 900KM to the east of Halifax area.

Regarding the Azores I am very interested in the possibilties there and will monitor 144.174Mhz when there is next a big opening to the east on 6M. I am QRV on 6M every day using a TS590SG/KPA500 and 5el LFA at 17M. Can you tell me the callsign of the Azores station that you were commenting with a few days ago?