Comparison of EI & GI stations for the Spanish IARU-95 award

The Spanish IARU 95th Anniversary award scheme was held in April of 2020 and they made a huge number of contacts across the world. The top 42 countries are shown below.... 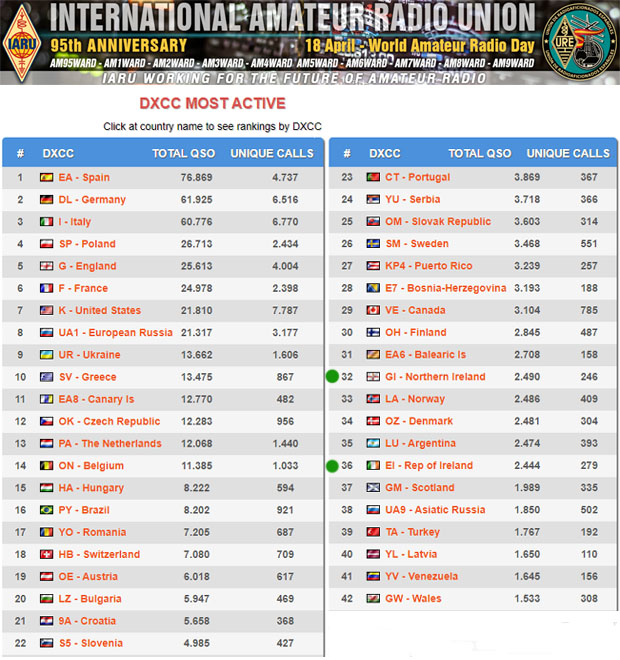 The Republic of Ireland (EI) was in 36th place with 279 stations making at least one contact with one of the AM*WARD special event stations. If we assume perhaps 30 or so busted calls due to the fact they were heard incorrectly on say CW or to a lesser extent SSB, then that brings the total down to about 250. That would probably be a significant proportion of the number of active EI call signs.

Northern Ireland (GI & MI) finished slightly ahead but the difference is only about 2%.

It seemed a bit strange that Scotland (GM & MM) would finish behind the Rep of Ireland (EI) considering the higher amateur radio population. As the chart shows, there were more amateurs active in Scotland (335) but they made fewer contacts overall. Perhaps the more northerly location made contacts harder?

Comparison of EI & GI/MI contacts... To compare the number and type of contacts made by the Irish stations, I did up a chart showing those those managed at least two contacts. This eliminates most if not all of the busted call signs. 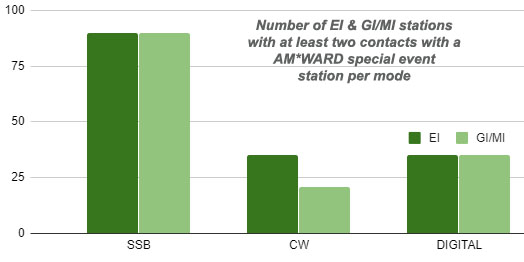 The chart shows that the those making two contacts were identical except that more EI stations were using CW.

If we look at the number of EI & GI/MI stations that work at least 5 of the 10 special event stations then an interesting pattern develops... 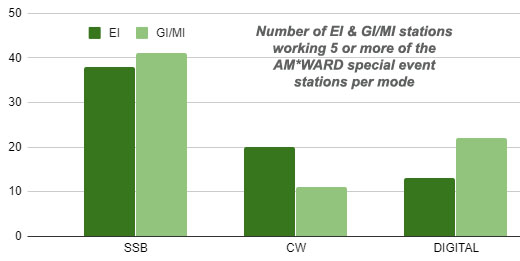 On SSB, slightly more GI/MI stations worked half of the special event calls (41 Vs 38).

On the digital modes (which was most likely FT8), there were clearly more GI/MI stations (22 Vs 13).

Why the difference? Perhaps it's due to the numbers of novice and intermediate licence holders in Northern Ireland whereas there are no such licence classes in the Republic of Ireland. Maybe just a statistical fluke?
Posted by John, EI7GL at Sunday, May 03, 2020