One of the niche areas of amateur radio and perhaps one of the most difficult is trying to make contacts by bouncing radio signals off the moon. 'Moonbounce' or EME (Earth-Moon-Earth) has its proponents who squeeze every last bit of improvement out of their antennas and equipment to overcomes the huge losses involved.

On a posting on the Moon-Net, Joe Taylor K1JT said he believed that the first moonbounce contact had taken place with the FT8 digital mode. 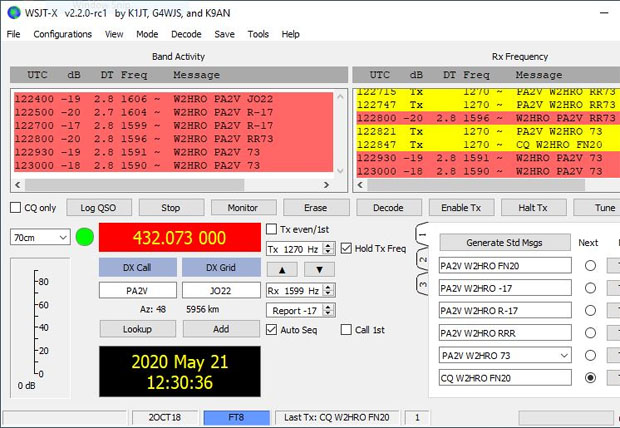 While the weak signal FT8 mode is hugely popular on the HF and VHF bands, modes like JT65 are more popular for EME due to its better sensitivity.

Some here will be interested to learn that earlier (21May20) today W2HRO and PA2V easily made (as far as I know) the first EME QSO using the FT8 mode.

Paul and Peter used WSJT-X 2.2.0-rc1, a beta-release candidate for version 2.2 of the program WSJT-X. Both stations have moderate 4-yagi setups on 432. Conditions today were not particularly good: degradation around 3 dB, and the Sun only 20 degrees from the Moon.

For terrestrial use the FT8 decoder searches over the range -2.5 to +2.4s for clock offset DT between transmitting and receiving stations. When "Decode after EME delay" is checked on the WSJT-X "Settings" screen, the accessible DT range becomes -0.5 to +4.4 s. Just right for EME. 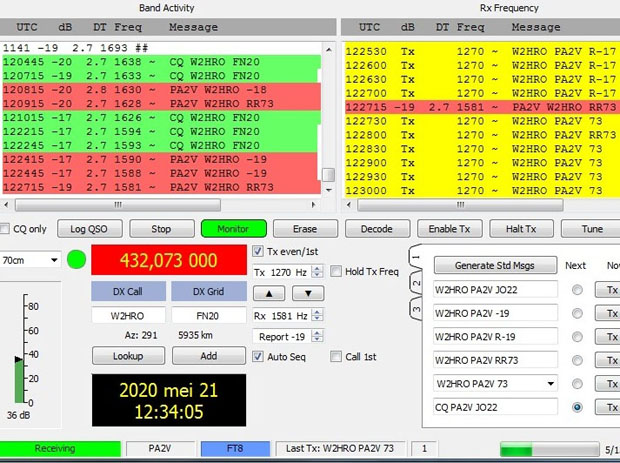 FT8 uses 8-GFSK modulation with tones separated by 6.25 Hz. At the time of this QSO the expected Doppler spread on the W2HRO - PA2V EME path was 8 Hz, which causes some additional loss of sensitivity. Nevertheless, as you'll see in screenshots posted here, the copy was solid in both directions:

Why might you want to use FT8 instead of "Old Reliable JT65" for EME QSOs? FT8 is about 4 dB less sensitive than JT65, but with 15-second T/R sequences it's four times faster and it doesn't use Deep Search. 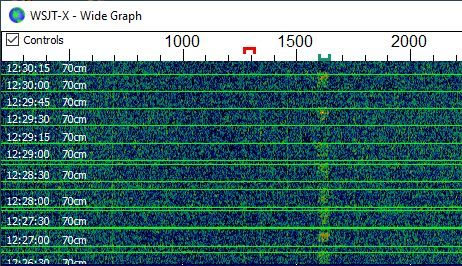 When I was active in EME contests on 144 MHz, I was always frustrated that even with reasonably strong (for EME) signals, one's maximum JT65 QSO rate is about 12 per hour. With FT8 you can do 40 per hour, as long as workable stations are available.

What about FT8 EME on 1296 MHz? It might sometimes work, but Doppler spread will probably make standard FT8 a problem. But if there were sufficient interest, we could make an "FT8B" or "FT8C" with wider tone spacing.