We now have welcome news that Croatia has joined the small number of countries that has allowed operation on the new 40 MHz (8-metre) band.

The license is valid for a year and then it could be renewed. There are rumors that some other stations will follow my example. 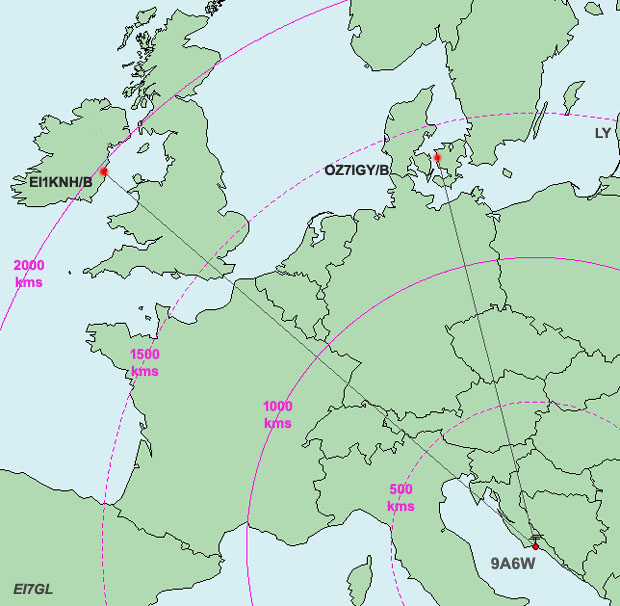 I received EI1KNH and OZ7IGY beacons this summer (2020) on many occasions. I am monitoring 6m these days for any openings (TEP or Es) and would like to be in touch for a possible QSO. I will use 40,680 for FT8.

Croatia is now the fifth country in which it is possible to operate legally on 40 MHz. Ireland, Slovenia & South Africa already have allocations on the band while Lithuania is willing to allocate spot frequencies for experimental purposes.

The frequency allocation that 9A6W has obtained is from 40.660 MHz to 40.700 MHz. This 40 kHz wide slice of spectrum is referred to the Industrial, Scientific & Medical (ISM) band.

There are a number of ISM bands but this is the one nearest to 40 MHz. In many countries, much of the low band VHF spectrum is allocated to military or other services. Licensing authorities may be unwilling to grant radio amateurs an allocation that hasn't been agreed internationally.

The ISM band at 40 MHz is an exception and it might be a good way for other countries to proceed i.e. individual licenses in the ISM band.

Range... As the map shows above, 9A6W is at an ideal distance for Sporadic-E openings to Ireland and Lithuania. As the most southerly 8-metre station in Europe, there is a possibility of some TEP openings to South Africa or perhaps via F2 near the peak of sunspot cycle 25.

The distance to Slovenia is about 200 kms which might be spanned by tropo or even meteor scatter during the major showers. 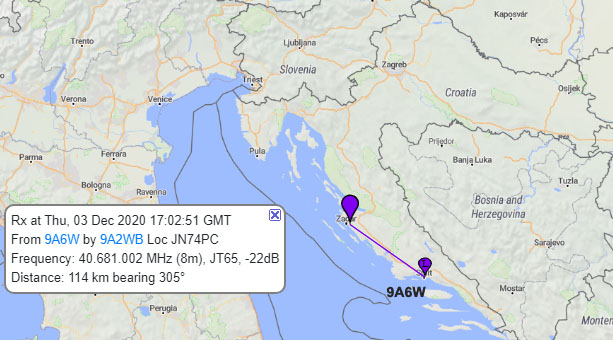 9A6W, Dragan Mojsilovic
has been reported SK (see his QRZ.com page).
I tried a 8m contact with him last December, which unfortunately failed and was looking
forward trying again this year, as I'm back in S5.