As this Sporadic-E and TEP seasons overlap, it allows for some remarkable contacts to take place on the VHF bands. This is a report from Mark, EI3KD near the south coast of Ireland who managed a contact with the Falkland Islands on the 21st of April 2021. 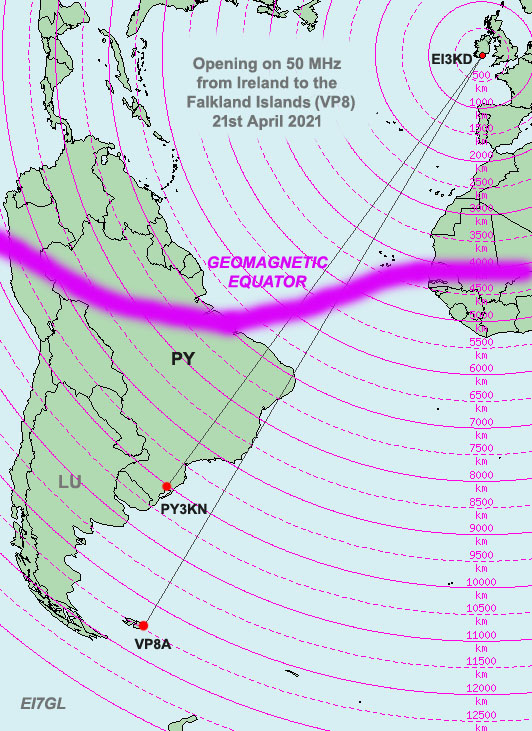 Mark, EI3KD writes... "50MHz TEP (Trans-Equatorial Propagation) was very good on the 21st of April, mostly at latitudes closer to the geomagnetic equator than Ireland. However, we did have a brief opening here; I was lucky enough to complete a QSO with VP8A in the Falkland Islands (GD18BH) at about 12,464kms.

For this contact, Mark was using a 6-element LFA2 Yagi 15-metres above ground level.

Analysis: As Mark notes, Trans-Equatorial Propagation (TEP) was the main reason for this remarkable contact but it doesn't fully explain the 12,400+km contact. It would seem likely that there was a Sporadic-E hop at the northern end of the path to Ireland and possibly also at the southern end for the final jump to the Falklands.

Prior to the use of digital modes like FT8, there were probably openings like this in the past but with signals down around -14dB, they would hand gone largely unnoticed on SSB or CW as the signals would be buried in the noise.