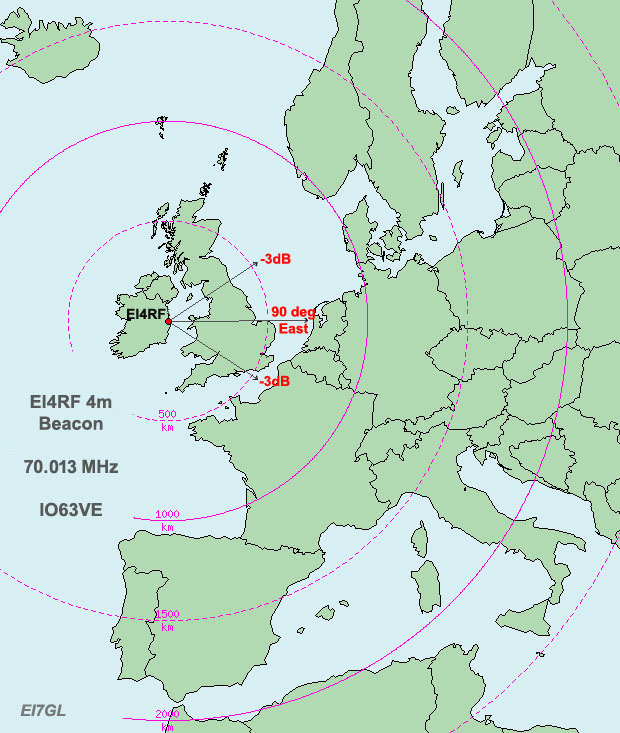 The Irish 4m beacon EI4RF has now been upgraded and is now transmitting on 70.013 MHz. It was previously operating on 70.130 MHz due to the limits of the older Irish 4m band.

It is still located to the south of Dublin in the locator square IO63VE.

It is running 25-watts into a 3-element Yagi pointing east (90 degrees). The map above shows the beam heading with the -3dB (half power) headings as well.

The signal for the beacon comes from a GPS locked RFzero board and it uses the following format per minute: 3 x 15 second FT8 transmission and 1 x CW transmission. 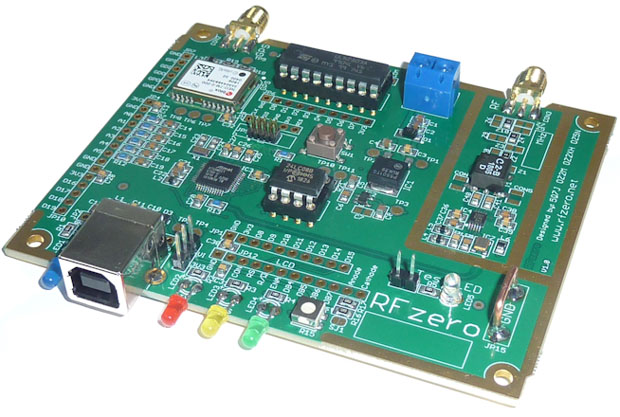 Analysis: This new upgraded EI4RF beacon should prove to be a valuable propagation tool for the 70 MHz (4m) band especially as it is running 25-watts into a directional antenna with about 6dB (x4 time power) of gain.
Anyone in England up to a distance of 500kms with a very modest station on 4m should be easily able to hear the beacon via tropo. Under enhanced tropo conditions, well equipped stations in the Netherlands at about 700-800kms might hear it.
As regards Sporadic-E, it should be very strong in the range of 1500 to 2200kms when the band is open... e.g. Poland, Baltic states, Croatia & Slovenia. During stronger openings when the MUF is higher, shorter distances down to 1000 kms may be possible... e.g. Germany.
Reception outside the -3dB points will be possible but obviously the further away from -3dB points you get, the weaker the signal.
EI4RF Site Profile: I have done up a site profile for the EI4RF site and it is shown below with the outline of the horizon.

I have included the 0 degree and 1 degree lines and I have coloured in the sea in light Blue to make it clearer.
As you can see, the beacon is on an elevated site and is looking down at the Irish Sea. Some of the mountains in the NW of Wales (90 deg) at a distance of 150kms or so are also visible. The plot clearly shows that there are no local obstructions between the -3dB points which is very good.
Outside of the main beam heading to the East, the path to the rest of Ireland is largely blocked by local hills and mountains. In the direction of Waterford (210 deg), the horizon has an elevation of about 3 degrees. In the direction of Cork (227 deg), the horizon rises to about 5 degrees. To the west, the horizon is over 7 degrees. It's highly unlikely that this beacon would be heard across the North Atlantic if there was ever some double hop Sporadic-E.
In conclusion: This beacon with its 25 watts should be easily heard in England via tropo and in eastern Europe via Sporadic-E. The inclusion of the FT8 digital mode is a welcome touch as it allows people to hear signals buried in the noise and there is already a lot of people using that mode. Any reception reports can be automatically uploaded to the PSK Reporter website to alert others of any opening.
Thanks to Tony, EI7BMB and Tim, EI4GNB who got this upgraded 4m beacon up and running.
* * *
Other site developments: From Tim, EI4GNB...
EI0SIX had a mild tune-up, as one of the pair of antennas had gone a bit droopy, now the SWR and bandwidth are excellent. It remains 40w to a pair of loops phased.
EI1KNH on 8m has had it's monopole antenna moved to the top of the 4m mast, away from the FDP for 5m, and now has a much healthier looking lot on my VNA. No more interaction with 5m. It's happy on 40w from the NXP PA.
EI1KNH on 5m now runs FT8 for 3 periods of 15 seconds, then runs a slow CW ID and a long carrier - previously it had been looping FT8 every 15 seconds. It's PSU was toast, and was causing hash all over HF to the remote stn there, so it's temp on the same PSU as EI0SIX. No change to the chain, 25w to a folded dipole.
Posted by John, EI7GL at Tuesday, April 27, 2021