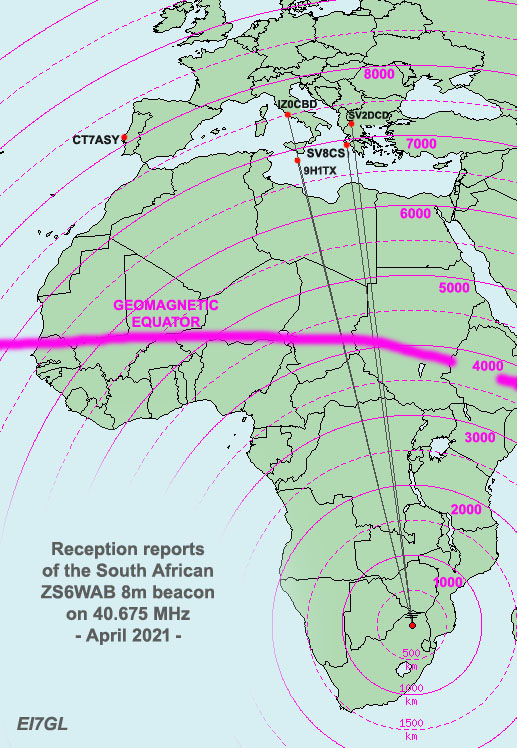 Following on from my previous post about the South African 8-metre ZS6WAB beacon on 40.675 MHz being heard by SV2DCD in Greece, there are now three more reports!

IZ0BCD: Francesco, IZ0CBD in Rome, Italy report reception of the 8m ZS6WAB beacon on the 20th of April 2021.

Francesco was using a Kenwood TS2000 and a 6-element Yagi for 50 MHz and the distance was around 7500kms.

Video clip at this link... https://raag.org/to-zs6wab-akoystike-sti-zakyntho/

Propagation Mode: As outlined in a previous post, the mode of propagation was TEP (Trans-Equatorial Propagation). As shown in the map above, both the beacon and the receiving stations are equidistant from the Geomagnetic Equator.

CT7ASY: Eduardo, CT7ASY near Lisbon heard the ZS6WAB 8m beacon on the 20th of April.

I am monitoring the band with an Icom IC7300 and a Sirio GPA 40-70 ground plane vertical antenna.

Until a couple of years ago, the 40MHz band was used, in Portugal, by the fire services in a country wide repeater network.

Since all emergency and police services moved to the new TETRA UHF network, this portion of spectrum was freed up and we can monitor some beacons, from Europe. South Africa is a first, though.