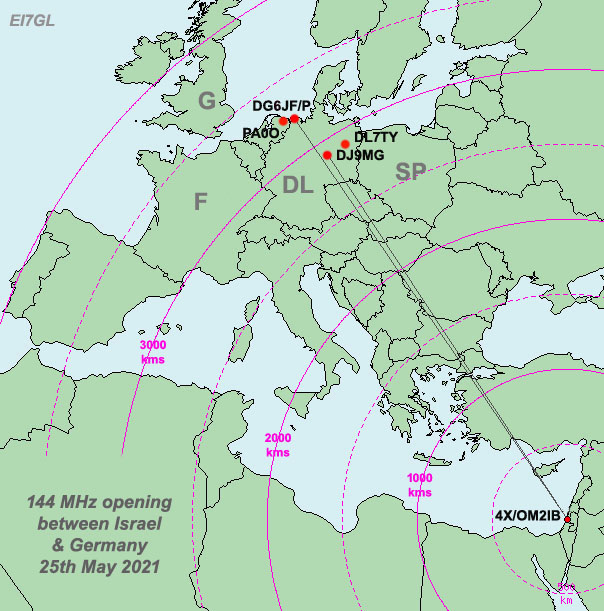 Tuesday 25th May 2021: During the major Sporadic-E opening on the 25th, many European stations made multiple contacts on the 144 MHz band. While the vast majority were in the one-hop range (<2300kms), there were a few exceptional contacts.

Jan, 4X/OM2IB in Israel (KM72JC) managed to complete two FT8 contacts with two stations in Germany during a short opening. 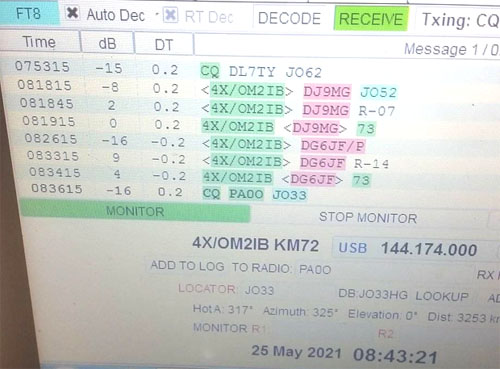 Propagation Mode: As outlined already, the normal maximum distance for one-hop Sporadic-E is about 2300kms. There are probably two choices to help explain how 144 MHz signals from Germany traveled the approximately 3000kms to Israel.

Theory 1) Sp-E & Tropo: In this scenario, there was one hop Sporadic-E from Germany to Turkey and then the last few hundred kms by tropo ducting over the sea to Israel. The tropo prediction map below from F5LEN certainly suggests that this might be possible. 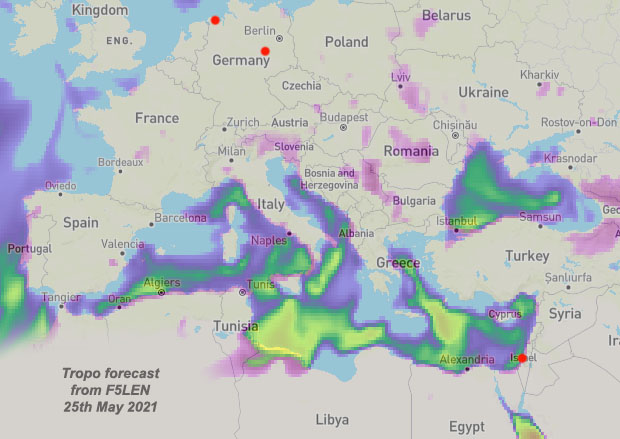 The distance from 4X/OM2IB to the coast of Turkey is about 700kms.

In this scenario, it's not hard to imagine a Sporadic-E hop of 2200kms going from DJ9MG is the eastern half of Germany to the southern coast of Turkey and from there via a tropo duct of about 700kms to Israel.

The problem however comes with DG6JF/P who is an additional 300kms further away at 3234kms. That can't be easily explained by a tropo extension at the eastern end of the circuit as that would require the duct to cross over a large part of the landmass of Turkey.  .

It's possible that the Sporadic-E ionised region was higher than usual which sometime happens near the start of an opening but it seems a bit of a stretch.

Theory 2) Chordal Hop: The other possibility is that there were two active Sporadic-E regions involved and the signal bounced from one to the other before returning to the ground. This resulted in a range in excess of 3000kms.

The problem with the Chordal Hop theory is that it requires two Sporadic-E clouds to line up correctly. It would seem that it does happen at 144 MHz but how often and for how long?

In conclusion: In his Sporadic-E report, 4X/OM2IB noted..."Random and very short openings. Probably sea TROPO + Es for this distance. Doesn't look like a double Es hop."

Sometimes when you can look back at an opening, you can examine the evidence and you can determine the most likely scenario. In this 144 MHz opening between Germany and Israel, it's hard to know for sure which propagation mode was responsible. I think without further evidence, we just have to put a question mark next to it.

It does however show yet again that contacts in the region of 3000 kms are possible at 144 MHz, the same distance across the North Atlantic from Newfoundland to Ireland.

1) PA0O in his blog post says he worked Istanbul in Turkey at 2150kms. This gives some additional credence to the Sp-E & Tropo theory. Link HERE

Interesting, especially your theory about what propagation was involved. Jaap PA0O reports his 4X receive on his weblog as well.

Everyone has their own opinions and experience, and maybe they are right. But on what basis do people make their claims about the 'probable' propagation mechanism? Are they guessing, or do they have some form of evidence?

When you consider that Es often consists of large-scale wave structure, and other complex forms, then it's not at all unexpected that random, transient propagation opens up.

Interestingly, openings on 6m to Israel seem to be much more common than I've seen in recent years this year. Not sure if that's propagation or just more activity from that area.