During the Sporadic-E opening on 144 MHz on the 19th of May, many stations in western Europe made contacts in the region of 1200 to 2300kms... a pretty standard distance for one hop Sporadic-E.

One path that stood out however was that between SM6VTZ in Sweden and EA8CXN in the Canary Islands. Although a full contact wasn't completed on this occasion, it was still a remarkable distance at approximately 3980 kms. This is the screen from SM6VTZ showing the attempted FT8 contact... 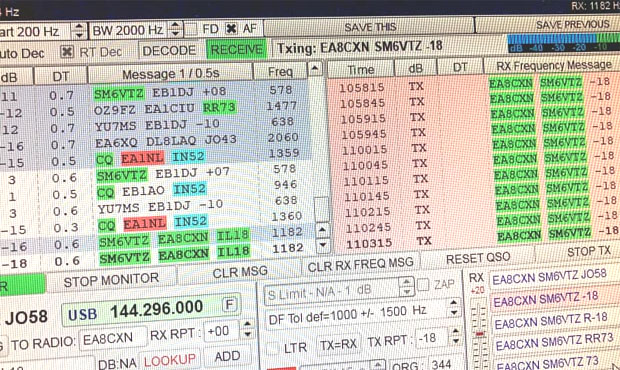 As you can see, the signal was quite weak at -18dB which is at a level below what is audible to the human ear.

Analysis: How did this happen? During the Sporadic-E opening, Chris SM6VTZ managed to work several stations in the north-west of Spain at a distance of about 2300kms. This is close to the maximum distance for one-hop Sporadic-E. 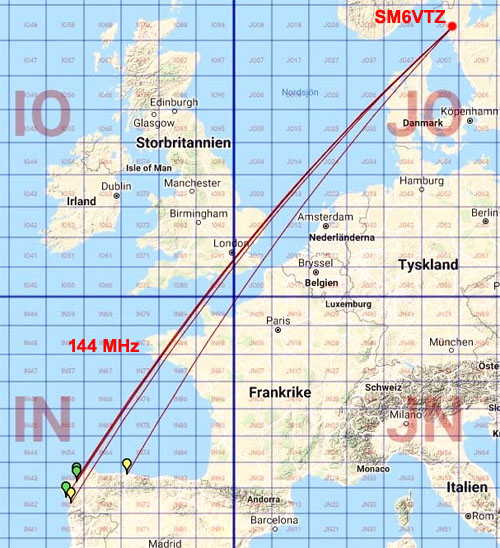 It's very likely that the Sporadic-E signal then coupled into a tropo duct for the rest of the journey to the Canary Islands. As the prediction mapt from F5LEN above shows, there was some good tropo from EA8CXN on the island of Tenerife to the north-west coast of Spain, a distance of about 1400 kms.

A similar combined Sporadic-E / Tropo ducting path was seen back in August of 2020 when there was an opening from the Canary Islands to Denmark, a distance of 3710kms. See previous post.

Some more examples of long distance 144 MHz signals can be found on my 144 MHz page.

Hi John,
Very good analyses as usual.
Tropo on the north atlantic is less intense than on d4/ea8/ea path.
Temperature issue I guess.
Es season start as the water temperature in the north is still too cold.
73 Pascal F5LEN

This all very interesting Regarding the north coast of Spain I can turn VO1FN antennas to monitor FT8 or Q65 frequncies. What is best freq 144.174mhz FT8?

To VO1HP: Yes, Frank. FT8 on 144.174MHz is a bit like the watering hole and that's probably the best place to listen.

To F5LEN: That's probably true Pascal but the tropo only needs to be near Spain/Portugal. The 2300kms on the western side could be Sp-E. I checked the cluster and there are 144 MHz spots for tropo from CU (Azores) to England in May 2020. 100% Trans-Atlantic tropo all the way across is probably unlikely as you say.