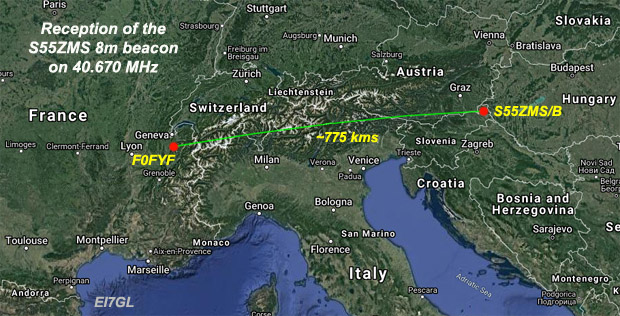 The beacon transmits in CW and PI4 and some of the decodes by Jeff are shown below...

The distance was in the region of 775kms which suggests that the propagation mode was short hop Sporadic-E.

In terms of short hop Sporadic-E, the 40 MHz band is worse than 28 MHz but better than 50 MHz. Under exceptional conditions, anything down to 500kms might be expected at 40 MHz.

Since this new 40 MHz beacon moved to its final location at the end of April 2021, it has been now been heard in Ireland, Portugal and France.

For more information on the 40 MHz band, go to https://ei7gl.blogspot.com/p/40-mhz.html

I’ve heard the beacon S55ZMS yesterday (8 may 2021) in Gorinchem The Netherlands on14:46 UTC with SDRPlay RSPdx & G5rv Junior antenne no very strong and with some fading. PA3GHQ