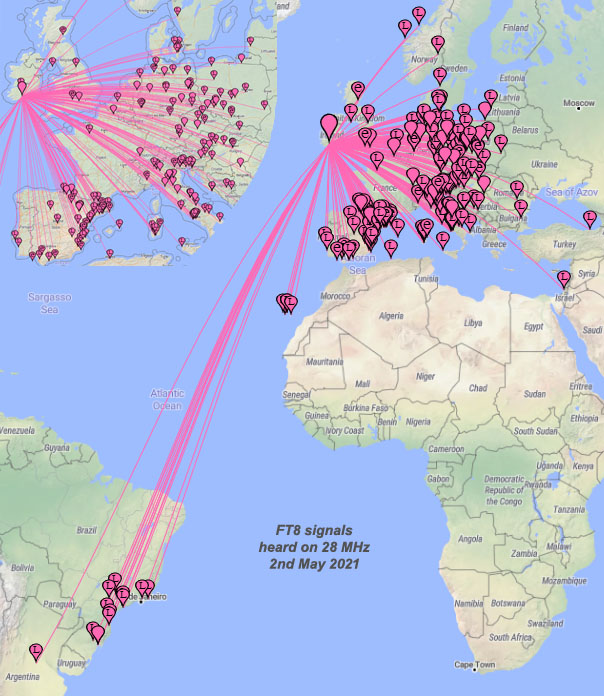 Sunday 2nd May 2021: This was a reasonably modest day on the 28 MHz band with 198 stations in 37 countries heard on FT8. The map above shows what I heard. It's interesting just how the Sporadic-E footprints can be pretty small and clusters of signals from a certain region make it through.
Notice the batch of signals from Sardinia and yet there was hardly anything from France for most of the day.

I did a few scans of the beacon band and I heard two...
EI7GL 28243.0 F5ZWE/B 15:49 02 May IO51TU<ES>JN02TW France
EI7GL 28271.0 OZ7IGY 12:07 02 May PI4 -14 dB Q=74 1393 km <es> Denmark
As you can see from the second spot, I was messing about with the PI4 software to decode the signals from the Danish beacon.
I tried listening on WSPR for a while but it was useless. On 28 MHz, WSPR is fine if the band is open to say the UK, Netherlands and Germany because there are a lot of stations there sending out WSPR transmissions. There is a major lack of active WSPR stations on 10m in France, Spain and Portugal which means the mode is of little use for propagation tests in certain directions.
Posted by John, EI7GL at Monday, May 03, 2021