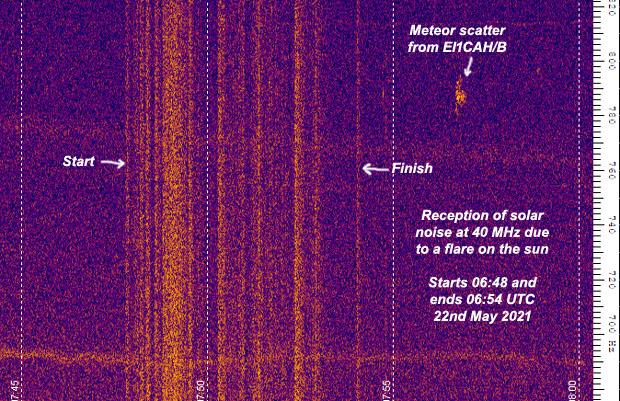 Early on the morning of the 22nd of May 2021, I was listening for some aircraft scatter signals on the 40 MHz band when I noticed a sudden onset of solar noise as shown above.

This sounds just like a hissing sound but the intensity comes in waves. It's not like say interference you might get from an electrical source which is very much on or off. Solar noise is a gentle hiss that rises and falls in intensity, a bit like waves would do as they crash on a beach.

The waterfall display above shows the event starting around 06:48 UTC and finishing at 06:54 UTC. As soon as I was sure it had finished, I checked the Space Weather Prediction Center website and sure enough, there was a solar flare that matched what I had heard. 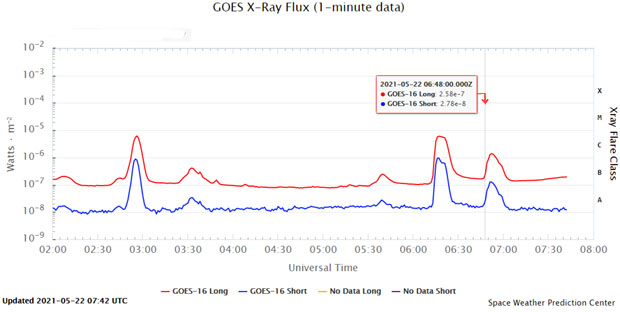 I later heard the same effect on 28 MHz while I was listening for WSPR signals and my Twitter feed had lots of tweets about solar flares and solar storms.

It seems to me that the 40 MHz band is a good choice for monitoring noise from the sun. It's high enough in frequency that it's above all of the usual F2 layer propagation and the antennas can be large enough to capture a lot of noise.

here is one i got a few years ago while monitoring pmr comms from the USA
https://www.youtube.com/watch?v=UBxv5ez09xk
73 David