New 40 MHz propagation beacon in the West of Ireland - EI1CAH 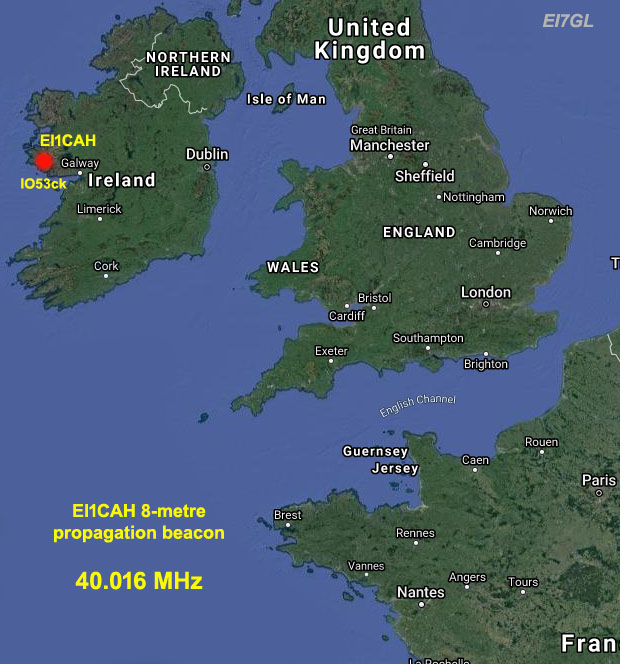 17th May 2021: There is now a new 8-metre propagation beacon in the west of Ireland using the callsign EI1CAH and it is operating on 40.016 MHz. The locator square is IO53CK.
This new beacon is designed to compliment the existing EI1KNH beacon which is situated near the east coast of Ireland. While EI1KNH has a superb take off the East, it is blocked by mountains to the West. By contrast, the new EI1CAH beacon has a good take off to the West and is poor to the East.
The EI1CAH beacon runs PI4 every second minute as well as CW. Its power is approximately 25 watts and the antenna is a horizontal dipole running roughly NW/SE.
The beacon keepers are using a QRPLabs Ultimate 3 (previously used on EI0SIX) to generate the 40 MHz signal and it has a matching internal QRPLabs 6m low pass filter which was modified to cut in closer to the 8-metre band.
They are using a NXP MRF101 based power amplifier to generate the required output power.
Analysis: This new 8-metre beacon is an excellent addition to the European suite of 40 MHz beacons and will be very useful in exploring Sporadic-E and F2 propagation paths across the Atlantic.
Site Profile: The graphic below shows the elevation profile for the EI1CAH beacon site.

There are some serious hills to the East which will block off a lot of low angle propagation paths. A typical Sporadic-E signal may be down around 5 degrees which as the image shows will be blocked by the local hills.
This is the likely maximum range due to one hop Sporadic-E... 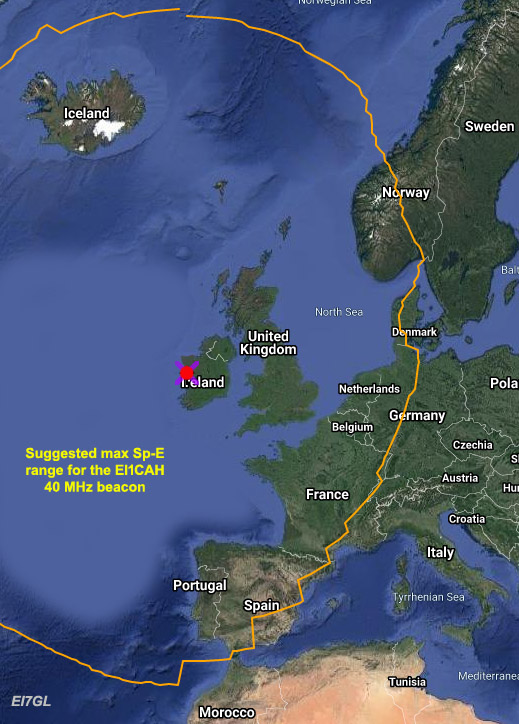 As you can see, under short skip Sp-E conditions, reception of this beacon may be possible in say the SE of England, Belgium, Netherlands, N France and the fast west of Germany. As the antenna is running NW-SE, the signal towards Spain will be poor.
What is key however is the low elevation to the West ...towards South America, the Caribbean and North America. 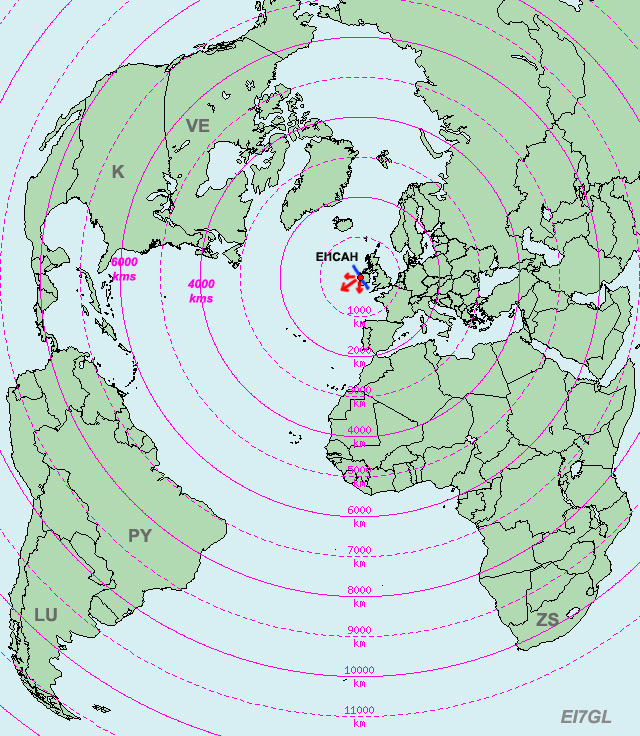 Under multi-hop Sporadic conditions, this 8-metre beacon will be heard across the Atlantic and the most likely people to hear it are those out around the 4000km mark in Nova Scotia and Maine. There is also the potential that it will be heard anywhere in the eastern half of the USA.
Likewise, it will reach the Caribbean at times and will certainly make it down to Brazil and Argentina.
Solar Maximum: Around the time of the Solar Maximum, there should be some East-West openings and this 8-metre beacon could be heard anywhere in the Americas.
Value of a 40 MHz beacon: The real value of this beacon is that there is a huge 20 MHz gap between the 28 MHz and 50 MHz bands. As the maximum usable frequency (MUF) for Sporadic-E and F2 propagation rises, it can be very difficult to know where exactly or how high it is.
By having a beacon at 40 MHz, it will allow serious 50 MHz stations to monitor the rising MUF and be ready for any potential 6-metre opening.
I think this beacon will be of real value as we get close to solar maximum and North American stations are checking for a 6-metre opening to Europe.
Thanks to Tim, EI4GNB and Tony, EI7BMB in getting this beacon up and running.
For more information on the 40 MHz band, see the information on my 40 MHz page... https://ei7gl.blogspot.com/p/40-mhz.html
Posted by John, EI7GL at Monday, May 17, 2021

Knowing that Sporadic-E paths can sometimes be very short-lived I grabbed my phone and filmed the computer's audio and waterfall display. A short recording is up on my YouTube channel for anyone who is interested.

Beacon can be heard every day last week, loud and clear in JO59BC
Tore LA3FV